​NEVER LOOK A GIFT HORSE IN THE MOUTH 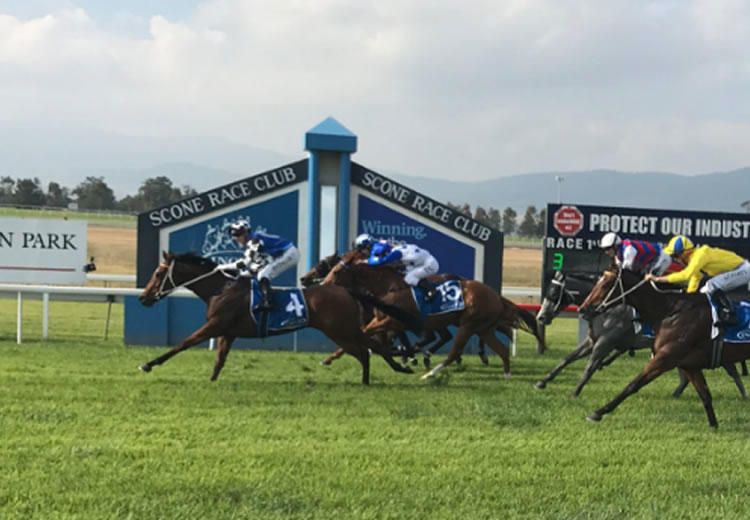 NEVER LOOK A GIFT HORSE IN THE MOUTH

BELINDA O’CONNELL knows how to “excel”!

In search of a novel gift for her husband Dane’s 30th birthday late last year, she hit upon the idea of buying him a share in a racehorse.

But where to start?

“I had absolutely no idea how to go about it,” Mrs O’Connell said.

That was until a racing-minded family friend suggested contacting Australian Bloodstock – and so she did and called director Luke Murrell.

On Murrell’s advice she purchased a 5 per cent share in an unraced two-year-old filly, and told her husband when his birthday came around in November that he owned a racehorse.

Now racing as EXCELAMOUR, the filly turned in a brilliant performance to win the $100,000 Inglis 2YO Challenge at the recent Scone Cup carnival at only her third start.

She had been runner-up at her first two outings (at Newcastle and Muswellbrook), and her Scone victory lifted her earnings to $89,625 (including a $20,000 BOBS bonus).

Not bad at all considering she was purchased for only $26,000 at the Scone yearling sale 12 months ago.

“Dane enjoys watching the races on TV, so I thought it might be exciting to get him a share in a racehorse,” Mrs O’Connell explained.

“Some of our friends had advised me against getting involved, warning that the upkeep of a horse might be too expensive.

“But Luke (Murrell) was very helpful, and he suggested that if we budgeted to put aside some money as a ‘horse fund’, there wouldn’t be a problem.”

When Mrs O’Connell told her husband, Sydney builder Dane, about his surprise birthday present, he was thrilled but didn’t know much about the filly’s breeding.

Clearly, she hasn’t. Excelamour is among the first progeny of Excelebration, who won eight of his 15 starts (including three Group 1s in England and France). He is a son of celebrated former Australian sprinter Exceed and Excel, himself a dual Group 1 winner.

The O’Connells have a one-year-old daughter Amelia and so far have seen their filly race only once – but it wasn’t at Scone.

“We drove to Newcastle for her debut on April 8 and got there about two minutes before the race,” Mrs O’Connell said.

“We rushed into the course carrying Amelia, watched Excelamour run a good second and then drove back to Sydney.

“But Dane finished work early and came home to watch her win the big race at Scone on television.

“He was jumping up and down as Excelamour made her charge in the straight. It was really exciting.

“I’m sure he wished he was there, especially when he saw some of the other syndicate members celebrating.”

Murrell says he recommended Excelamour to Mrs O’Connell because he felt she was a likely prospect at a minimal outlay.

“I really liked this filly when I saw her,” Murrell said. “I’m very big on statistics.

“Edinglassie Stud at Muswellbrook, which offered her at Scone, is an exceptional little nursery and has an excellent record for producing nice horses.

“Excelamour was nicely balanced when she paraded at the sale, and I thought she might at least get to midweek class in town.

“I was hoping she might sell cheaper than she did because she was by a European sire that wasn’t really well known out here.

“But someone else also liked her. Thankfully, we got her and she has already paid back her purchase price and associated costs with plenty of interest.”

Excelamour’s trainer Kris Lees has decided to spell the filly to allow her more time to strengthen and mature. No doubt the O’Connells can’t wait until she returns to the racetrack.