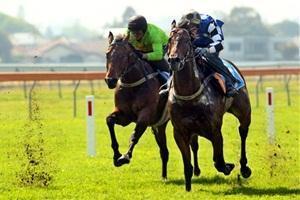 Beaufort Gyre has been runner-up at his past two starts and been placed four out of five career runs.

Lees may have found the perfect race for the three-year-old which has been second at Gosford and Wyong at his past two.

The gelding has drawn perfectly in gate four and with Munce in the saddle looks extremely hard to beat.

Munce captured the headlines last week when he become the first jockey in Queensland history to ride 100 winners in a season in the metropolitan area.

‘‘Chris had several chances for a ride in the big maiden but we got him, which is great,’’ Lees said.

‘‘He is obviously going enormous and it does not hurt to have a jockey of his calibre riding for you.’’

Lees said the reason he decided to send his galloper north was simple.

‘‘There are not too many maidens worth one-hundred grand,’’ Lees said with a laugh.

‘‘He goes well and this is the perfect opportunity for him to break his maiden and earn his owners plenty of prizemoney.’’