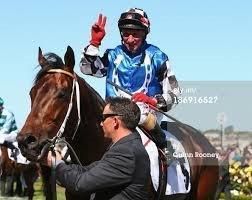 Salon Soldier debuted at Randwick on October 12 with a powerhouse victory, coming from the tail of the field over 1400 metres.

On Tuesday, jockey Jim Cassidy parked the son of Soldier Hollow in the box seat. When the Gai Waterhouse-trained leader Rain Drum rolled off the fence entering the straight, the grand-slam winning hoop punched Salon Soldier through.

He took a few strides to gather momentum but the result was never in doubt after the five-year-old hit the front.

“He is a very exciting horse, I think he’d want a little bit more cut in the track than he did today and when he does I think we’ll see the real deal,”Cassidy said.

“He’s been impressive in both runs and it’s always nice to come to Melbourne and take on the better quality at this time of year.”

Lees said he had “little doubt” about Salon Soldier tackling the 1800 metres second-up before suggesting a pair of Group I races next autumn as a possible target.

“He probably didn’t show the same turn of foot that he did the other day but I think he’ll be better suited when you get him over further ground,” he said.

“I’ll see how he pulls up but my thoughts are to put him out and have a fair dinkum go at the autumn, I think he can measure up in a Ranvet and possibly a BMW.”

Salon Soldier ($2.80fav) defeated the Sam Kavanagh-trained Midsummer Sun ($16) by a length with three-quarters of a length to the Jane Chapple-Hyam-trained Mull Of Killough ($10) in third