American switch in motion for Danceteria! 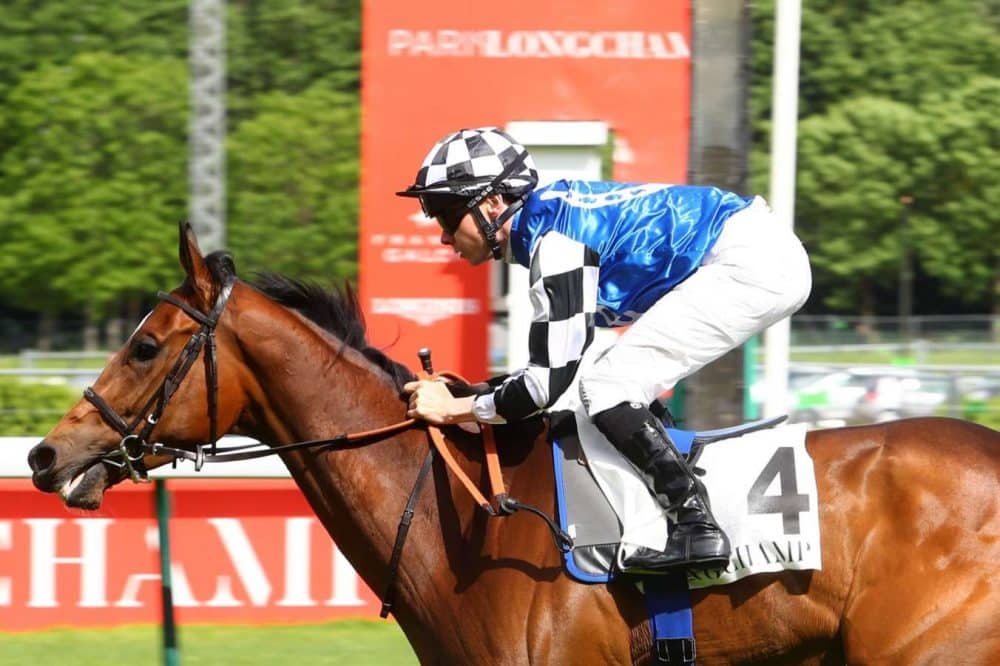 Story by Tommy Churchyard and Andrew Hawkins for ANZ Bloodstock.

Australian Bloodstock principal Jamie Lovett remains hopeful that Danceteria (Redoute’s Choice) may be able to strike his best form in a new environment with the German Group 1 winner now in the United States with Graham Motion.

In giving a sweeping summary about a number of Australian Bloodstock’s leading lights, Lovett told ANZ Bloodstock News yesterday that Danceteria, who had six starts in Australia and never finished closer than six lengths from the winner, had been plagued by a number of ailments since he finished behind Lys Gracieux (Heart’s Cry) in the 2019 Cox Plate (Gr 1, 2040m). That resulted in the gelding departing Australian shores on November 2.

“We still own him, we transferred him to Graham Motion about three weeks ago,” Lovett said. “He will campaign there and poke around the edges and hopefully get him back to his best form. He’s a horse that’s had a few little issues ever since the ill-fated Cox Plate trip 12 months ago, so we just hope he amends those issues in the States.”

Owned by Clive Washbourn for his first two seasons of racing, the David Menuisier-prepared Danceteria was purchased by Australian Bloodstock after winning the Prix Jacques Laffitte (Listed, 1800m) at Maisons-Laffitte in April last year.

Early signs were promising as he progressed to win the La Coupe (Gr 3, 2000m) at Longchamp and the Grosser Dallmayr-Preis (Gr 1, 2000m) at Munich, split by a solid fourth behind Enable (Nathaniel) and Magical (Galileo) in the Coral-Eclipse Stakes (Gr 1, 1m 2f) at Sandown.

However, he missed his intended first-up run in Melbourne in last year’s Caulfield Stakes (Gr 1, 2000m) due to a poor scope and, even after joining Kris Lees following the 2019 spring, those minor issues continued to flare up.

Since joining Motion, Danceteria has had two publicly-recorded four-furlong breezes at Fair Hill Training Center in Maryland. At this time of year, Motion tends to campaign his horses in Florida, opening up the possibility that the Pegasus World Cup Turf (Gr 1, 9.5f) at Gulfstream Park could be an initial target.

The Australian Bloodstock blue, white and black colours have been seen in North America a number of times before: Delectation Girl (Delegator) was trained by Wesley Ward throughout 2018 before heading to Australia, Melbourne Cup (Gr 1, 3200m) winner Protectionist (Monsun) brought the curtain down on his career in the Canadian International (Gr 1, 12f) at Woodbine and Goldstream (Martino Alonso) had his first run for the ownership group when fourth in the Secretariat Stakes (Gr 1, 10f) at Arlington.

It is also not Motion’s first time preparing a horse for Australian owners, with Arrowfield Stud acquiring a majority share in his Kentucky Derby (Gr 1, 10f) winner Animal Kingdom (Leroidesanimaux) before his five-year-old preparation, when he won the Dubai World Cup (Gr 1, 2000m).

Another of the Australian Bloodstock horses who departed the country in recent weeks was Hotham Handicap (Gr 3, 2500m) winner Ashrun (Authorized), returning to Andreas Wohler’s base in Germany on November 11 after finishing tenth in the Melbourne Cup.

Ashrun is likely to begin his campaign early in 2021 in the second running of the Longines Turf Handicap (3000m) in Riyadh. The inaugural Saudi event in February featured two Melbourne Cup winners in Cross Counter (Teofilo) and Twilight Payment (Teofilo), two Hotham Handicap winners in Prince Of Arran (Shirocco) and Downdraft (Camelot), and a two-time Queen Elizabeth Stakes (Gr 3, 2500m) winner in True Self (Oscar).

“He arrived back in Germany in tip-top order after a quiet couple of weeks,” Lovett said. “All things being equal we will head to the two-mile race on turf in Saudi Arabia, which will be his next assignment.

“He’ll then campaign in Europe over the next 12 months before we then bring him back down here for the Melbourne Cup next November.”

Perhaps the biggest splash this spring was caused by Mugatoo (Henrythenavigator). Having already developed into a Canberra Cup (Listed, 2000m) winner in the autumn, Mugatoo went to a new level this campaign, winning the Premiers Cup (Gr 3, 1900m) and Newcastle Cup (Gr 3, 2300m), finishing second by a head in The Metropolitan (Gr 1, 2400m) before producing a tremendous run when fourth in the Cox Plate.

He was due to start second favourite in the Mackinnon Stakes (Gr 1, 2000m) behind eventual winner Arcadia Queen (Pierro), but he suffered a minor injury on the float to Flemington and was withdrawn.

“Mugatoo has had the saddle off his back for a couple of weeks and is back in full training now,” Lovett said. “He’ll just poke around now until late February, with a view to targeting the Queen Elizabeth in Sydney.”

Last year’s Ebor Handicap (1m 6f) winner Mustajeer (Medicean) has developed into something of an enigma during his time in Australia, producing terrific performances on occasions and struggling on others.

A glimpse at the form guide would suggest firm ground plays against him, something that Lovett admits, with the eight-year-old to search for soft ground in 2021. That means that a third Melbourne Cup campaign is off the table.

“He doesn’t appreciate fast ground so he’ll be another one that campaigns in Sydney and Brisbane, and then we’ll give the spring a miss next year,” he said. “He’ll likely shop around for some softer targets, maybe a race like the Brisbane Cup in the winter.

“Obviously we’ll get him through to a Sydney Cup if the track is suitable, but then certainly up to Brisbane or the winter carnival all things being well.”

Next shipment of imports arrives tomorrow

Australian Bloodstock has developed a large portfolio of horses, both locally acquired and purchased abroad. It is a number that is set to grow by nine tomorrow when a shipment lands in Australia from the UK.

Among them is Fifth Position (Dark Angel), who was Listed-placed at three and developed into a promising handicapper at four; Mankayan (Intello), who has built a consistent record from just nine starts for Charlie Fellowes, as well as his former stablemate Mayfair Spirit (Charm Spirit); and Daysan (Temple City), a former Shadwell colt who is out of the Group 1-placed Malibu Pier (Malibu Moon) and is a half-brother to Group 1-placed Coasted (Tizway).

“Probably the most exposed horse is Fifth Position, Mick Price and Michael Kent Jnr will train him for us in Melbourne,” Lovett said. “With those sorts of purchases, which we’ve had a good degree of success with previously, they’re horses that generally aren’t too exposed. There are a few there that have runs on the board, but the majority of those we’re hoping, like we’ve done in the past with Candidate, get here off a low mark and hopefully we can take them through their grades.

“There’s a good mix of horses there so I’m hoping they should pay for themselves. I don’t think we paid excessive money, I think the Tattersalls Horses In Training Sale was a good sale to buy at, and I guess the proof will be in the pudding and time will tell. But I’d like to think if they bring their UK form they’ll be easy to place in Australia.”

When the group departed Newmarket yesterday, the December chill had firmly set in and snow dusted the paddocks around the racing mecca. When they land in Australia, they will face a typically hot summer – although the early forecast for their arrival tomorrow suggests that they will be met by very mild temperatures.

Still, it adds another dimension when trying to allow horses to acclimatise to their new environment.

“I’ve got my own farm in Australia and, a lot of those horses, we get them out of quarantine and we pull a set of bloods from them and monitor them very closely for the first couple of weeks,” Lovett said. “They are all different – some horses will keep wanting to grow their coat while other horses will drop their coat out and we don’t have any problems with them. There’s no two that I find are the same, they’re all different and you’ve just got to keep a very close eye on them.

“We’ve had a few fall apart and haven’t done well, so we’ve had to back right off and try and nurse them through that harsh summer when they arrive, because these horses are now arriving in 40-degree heat some days. I find fillies and mares don’t always handle it as well, whereas we don’t have too many issues with most of these tougher colts and geldings.

“They’re coming from extreme cold to extreme heat this year so we’ll have to keep a very close eye. The horses that are going to Ciaron Maher have been in training in Newmarket the whole time before quarantine, so the others that haven’t been in work, we’ll just bring them up nice and slow, given they’ve been out of training for a month.”

For Lovett and his Australian Bloodstock partner Luke Murrell, the focus has now turned from the tried horse market to the yearling auctions, with sales season kicking off early next month with the Magic Millions Gold Coast Yearling Sale.

“We’ve got three or four out here that we bought over in an earlier shipment that haven’t raced yet, but they’re coming off a fairly low mark and we’re hoping they’re going to be progressive horses,” Lovett said.

“Predominantly we’re now doing a lot of work for the yearling sales, with our first one kicking off in January, so we’re doing a lot of pedigree homework and inspections in the Hunter Valley.

“So we’re closed up as far as the imports go now. We went pretty hard at Tattersalls, so if a private purchase was to arise I’d suggest it would only be one or two, with the main focus being on yearlings.”

By Tommy Churchyard and Andrew Hawkins for ANZ Bloodstock.