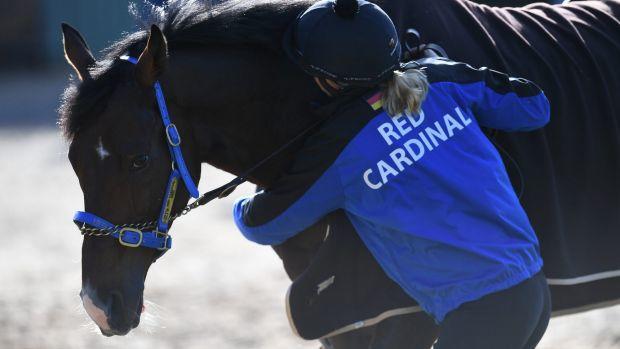 German trainer Andreas Wohler knows what it is like to win the Melbourne Cup, having enjoyed victory in 2014 when Protectionist romped to an easy triumph under English champion jockey Ryan Moore.

Now the 55-year-old horseman is back in town and keen for a repeat effort next week courtesy of Red Cardinal, a horse who has gone under the radar somewhat as he has not had a preparatory run in this country.

Red Cardinal, a son of Coolmore stallion Montjeu, has not been seen in public since a disappointing fifth of eight in one of Europe’s key lead-up races, the Prix Kergorlay at Deauville.

That race was won by well-fancied Cup contender Marmelo, who ran an impressive Melbourne Cup trial when sixth in the Caulfield Cup.

But Wohler counsels punters against reading too much into that form, saying his galloper was not at his best that day.

“The Kergorlay is a good race but that day Red Cardinal was not himself, he didn’t like the ground [described as good] that day, and he also had a skin allergy,” Wohler told a Cup carnival launch crowd at Flemington racecourse on Tuesday.

And he is confident that he will not be far from the leaders next week, especially if Marmelo is in at the finish.

“I think where Marmelo is, we are at least,” he declared when asked about his horse’s prospects.