Another Quality Filly Joins The Team. 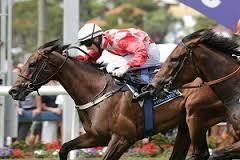 ~~O’Reilly filly Hera moved into second position on the New Zealand Bloodstock Filly of the Year Series leaderboard with an all-the-way win in the G2 Cambridge Stud Sir Tristram Fillies Classic at Te Rapa on Saturday.

The Karaka Select Sale graduate had previously earned 8 points in the series with her victory in the G2 Eight Carat Classic and earned a further 8 points to take her tally to 16, placing her second behind Costa Viva (Encosta de Lago) on 20.5 points.

Trained by Roger James, Hera found a kick on the inside to repel another O’Reilly filly Spellbinder to win by a neck, with The Fire Inside a further 1.8 lengths away in third.

“The filly was able to step outside of the square and was still able to be as impressive as she was, it made the win all that much better,” commented James.

“Significantly she was last to pull up at the end of the back straight, it was a nice staying effort.

“There has been no decision made on where we will go with her, I’m tending to think that we will probably back off and look at the Queensland Oaks as her main mission.

“We have got to do what is best for the horse, she is only a lightly framed filly and I think three months extra will really help her.

“She was one that probably got under the radar at the sales and we got a bit of luck. The two best in my stable at the moment are this filly and Silent Achiever, both by O’Reilly.”

It was the third stakes victory in the three-year-old filly’s career having also won the Listed Great Northern Foal Stakes as a two-year-old along with her two G2 successes this season.

Roger James purchased Hera at the 2012 Karaka Select Sale for $28,000 from Waikato Stud.

The Series heads to Hawke’s Bay for the penultimate leg, the G3 Lowland Stakes before concluding with the G1 NZ Oaks that will see the winner earn 12 points.