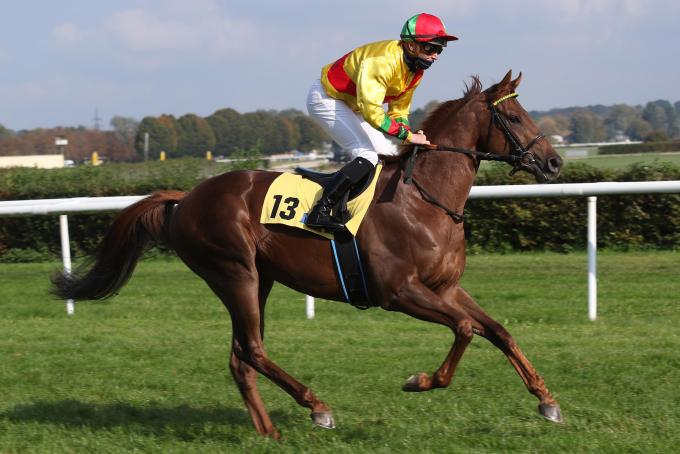 Australian Bloodstock co-director Jamie Lovett confirmed the news on Wednesday ahead of Lambo attempting to win his third-consecutive race in the €130,000 (A$205,000) Group 2 Prix Hocquart (2200m) at Longchamp on Sunday.

“He looks a very nice, progressive three-year-old, I’m really pleased to be able to get him,” Lovett said.

“We didn’t look to go and buy a son of Protectionist, the theatre of that is great, admittedly, but for us he just stood out a bit. The fact he is by Protectionist is an absolute bonus, there’s no denying that, and I’ve got a big thrill out of it.

“The trainer (Miroslav Rulec) is quite keen (to run in the Prix Hocquart), he trains up near Baden-Baden, which is close to the Germany-France border, so for him to go into France is quite painless.

“He’s set the bar pretty high, the Prix Hocquart will be a tough race and we’re just hoping for a good run that will top him off for the German Derby at Hamburg.”

German bookmaker RaceBets has assessed Lambo as $12 third favourite for the €650,000 (A$1m) Deutsches Derby at Hamburg on Sunday, July 4.

Lambo is likely to be joined by Deutsches Derby fourth favourite Martial Eagle in the Prix Hocquart, with trainer Francis Graffard and the ownership group of German stud Gestüt Schlenderhan seeking to win the Derby for the second-consecutive year after subsequent Arc runner-up In Swoop won at Hamburg last July.

Lovett said he would be guided by Rulec and the performances of Lambo before determining where his racing future lies, with no immediate ideas of importing him to Australia.

“The horse is a little bit immature, I think he will be better in time,” Lovett said.

Lambo raced twice as a two-year-old, finishing fifth and third at Baden-Baden between 1400 and 1500m.

Lambo has produced strong on-pace performances to win both three-year-old starts, his maiden success over 1800m at Fontainebleau on April 9 and then the G3 Bavarian Classic (2000m) at Munich on May 1.

The previous Bavarian Classic in 2019 was won by Django Freeman, who subsequently finished runner-up in the Deutsches Derby and is now trained by Robert Hickmott in Victoria.

“We’re very big on times, the sectionals they run and the types of ground they compete over there and everything we’ve seen to date we’ve had to double check the data because his times have been off the charts,” Lovett said.

“He’s only had four starts, only two runs as a three-year-old. His maiden win at Fontainebleau over 1800 metres, he ran the hands off the clock that day going quicker time than the older horses. All the things we like to see, he did.

“He didn’t have the handlebars right down at Munich, but he still kicked clear to win, the rider (Adrie de Vries) was very kind to him over the last 100 metres.

“The ground at Fontainebleau for his maiden win appeared quite fast (officially rated Good) and when he was at Munich it was a rain-affected track more akin to a Soft 7 here. There’s different sections of that Munich track which can race softer than others.

“But I like the fact he’s effective on both dry and wet ground. Good money was coming from everywhere for the horse and we’re just delighted to secure him. The current owners are staying in him for a little bit and I love the idea of having a partnership over there.”

LAMBO the first SW for Protectionist winning the Gr3 Bavarian Classic at Munich.

Lovett and fellow Australian Bloodstock director Luke Murrell remain owners of Protectionist and have strongly supported the 2014 Melbourne Cup winner at stud. Protectionist stood for €6,500 at Gestut Rottgen in Germany during the 2021 breeding season.

“We had offers in Europe to sell but not for a lot of money, so we got behind him a bit,” Lovett said.

“We got a group of mares and have supported him on a level that is affordable for us to ensure he would get a good book.

“In Germany they’re breeding less than 1000 foals a year, there’s not a lot of stallions and a big book is 60 to 70 mares. We got him (Protectionist) a good book the first few years so we’re just hoping he can make his mark now.

“They’ve lost a couple of stallions in Germany in recent years, champion stallion Adlerflug died in April, so there’s a market developing for a really good stallion.

“People are now starting to sit up and take note of Protectionist. It’s really pleasing us that they’re showing up as two-year-olds and winning over distances as short as 1600 metres.

“From a financial point of view, we’re in him for the long haul and there might be a nice reward in time.”