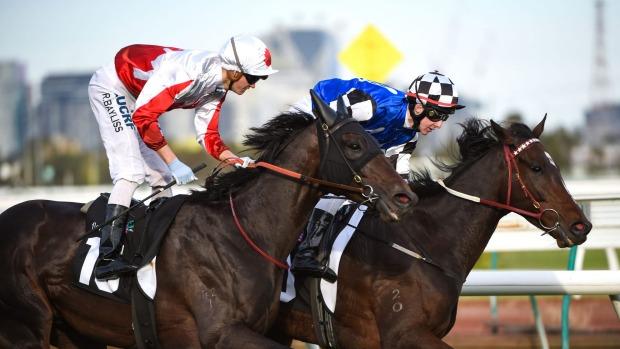 Success over the Melbourne Cup course has whetted the appetite of apprentice Harry Coffey.

Coffey hopes to be back at Flemington in six months time to partner another Weir-trained runner Signoff in the Melbourne Cup, a horse he’s been associated with since early this year.

After being headed early in the straight, Glorious Sinndar ($5.50) fought back to score by a short-head from The Bandit ($9) with the favourite De Little Engine ($4.80) 2-3/4 lengths away third.

Coffey suffers from cystic fibrosis and was out of breath after the race.

“I’ll have to get a bit fitter if I’m going to ride Signoff,” Coffey said.

“Darren’s getting a lot of nice stayers around him and I’m lucky enough to be associated with Signoff and hopefully I can continue that.”

Coffey said Glorious Sinndar deserved credit for his victory after the runner-up had gained a half-length break early in the straight.

He said Glorious Sinndar was all out in the last 20m and it was heart that got him home.

“We took all the short cuts and had a beautiful run but he was primed for the day with Weiry’s training,” Coffey said.

“Full credit to the horse, when the war was there he stuck the head out at the right time.”

With Weir in Adelaide to oversee last year’s Melbourne Cup winner Prince Of Penzance in his return second placing at Morphettville, racing manager Jeremy Rogers said Coffey was deserving of the victory.

Rogers said a change of environment had sparked a turnaround in form from Glorious Sinndar.

“I might be wrong but I thought he came to us as a jumper,” Rogers said.

“He’s had three starts for us now for three wins.”