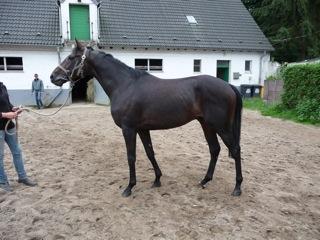 Formerly trained in Germany, Lucas Cranach has won 4 races from 7 starts including the Group 2 Grosser Preis Von Lotto Hamburg – Hansa-Preis at Hamburg in June which he snared thanks to an incredible turn of foot (see video link).

Australian Bloodstock Director Luke Murrell is counting down the days to the Cup having been well and truly bitten by the bug in 2010.

“We identified Lucas Cranach in Germany with our European agent and once we went through his form carefully we realised that we might have struck a bit of gold,” said Murrell.

“The German form is pretty underrated in Europe but the key to this horse is that he has an extraordinary turn of foot and is still very lightly raced, and importantly he has performed well in France.”

Anthony Freedman has been given the job of preparing the horse for the Caulfield and Melbourne Cups and will be ably assissted by travelling foreman and 5 time Melbourne Cup winning brother Lee.

“I’m obviously very impressed by what I’ve seen of the horse and I am thrilled to have him in my stables,” said Freedman.

“It’s very exciting and I’m looking forward to the challenge.”

Lucas Cranach will be stabled in newmarket prior to arriving in Australia on September 24th. He will spend a further period in quarantine at Werribee before relocating to Freedman’s palatial Markdel Stables at Rye.