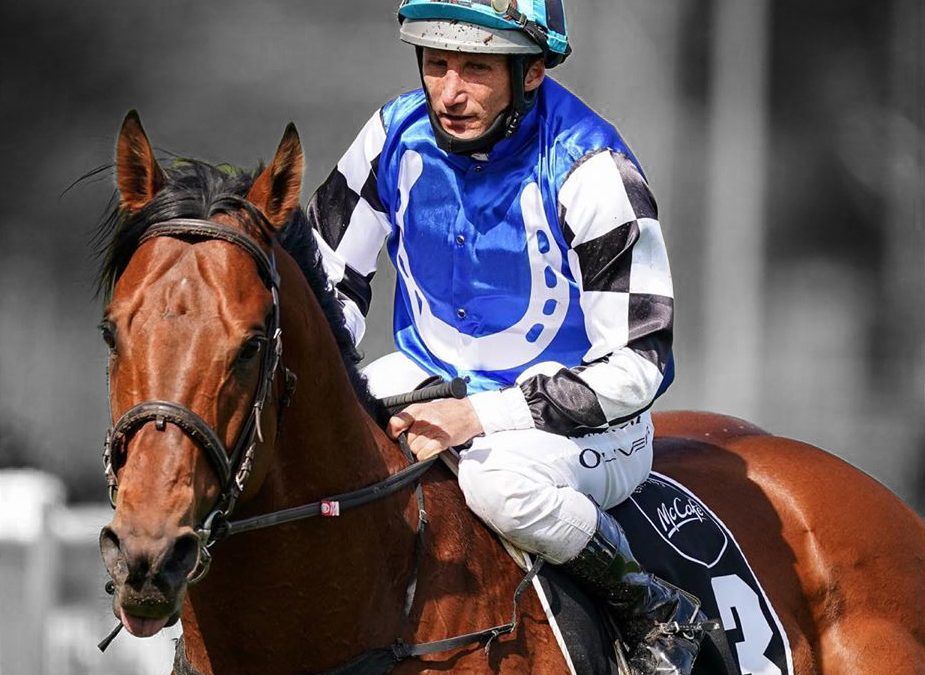 ​Story by Bren O’Brien for tdnausnz.com.au

The upcoming spring promises continued success on the racetrack for Australian Bloodstock, but it is the progress made in the breeding barn, with a 20-strong broodmare band and interests in a bevy of young stallions, including Kitchwin Hills’ new boy Graff, that has Jamie Lovett excited for the future.

Australian Bloodstock, run by Lovett and Luke Murrell, built its reputation from sourcing prospects for Australian feature races at a global level, headlined by Protectionist’s (Ger) victory in the 2014 G1 Melbourne Cup.

Launching off the success of Master Of Design‘s win in the 2012 G1 TJ Smith S., the Australian Bloodstock colours have been to the fore with horses such as Brave Smash (Jpn), Tosen Stardom (Jpn), Shraaoh (Ire) (Sea The Stars {Ire}) and more recently, All-Star Mile winner Mugatoo (Ire) (Henrythenavigator {USA}).

The racing business is still at the forefront of Australian Bloodstock and it recently invested in two serious contenders for the Melbourne spring features, but the breeding aspect of the operation is gathering considerable momentum.

Lovett speaks with the same enthusiasm for Graff’s first season at Kitchwin Hills as he would a high-profile racing acquisition out of Europe, and he feels the son of Star Witness will get every chance for success.

“Graff really excites me. Alan Bell bought the horse as a yearling, and you know they must be good looking when Alan buys them. I’ve got a good association with Kris Lees and I’ve seen him do things on the track that I have never seen before in terms of times,” Lovett told TDN AusNZ.

“You only have to look at the Golden Rose, where he was beaten by The Autumn Sun. You reverse the runs and he’s a $50,000 stallion. He was a really, really good racehorse, and one of the best-looking horses I have been involved with. If he leaves that in his stock, then we are off.”

“He (Graff) was a really, really good racehorse, and one of the best-looking horses I have been involved with. If he leaves that in his stock, then we are off.” – Jamie Lovett

Lovett confirmed Australian Bloodstock and its clients will send around 15 mares to Graff, who will stand for $13,200 (inc GST), and whose opening book is already into triple figures.

“He’s going to get such a good chance at stud, that was what convinced me to get behind him and we sent three truckloads of mares up there when the deal was done. We thought ‘here’s the chance to get in on the ground floor’,” Lovett said.

“The fact that he is free of Danehill in that first few generations, makes him so easy to breed to. There are a lot of people who have these fast and speedy Exceed And Excel, Snitzel and Not A Single Doubt mares, who don’t have the option of going to those Danehill-line horses.

“We’ve sent mares that have good breeding histories. I know Kitchwin Hills have done the same and Max Whitby. When you have those good blokes around you, you can make a good stallion.”

Tosen Stardom, a dual Group 1 winner in the Australian Bloodstock colours, is about to enter his fourth season at Woodside Park in Victoria. Australian Bloodstock sent four mares to him last year and will continue to support him strongly in 2021. With the son of Deep Impact‘s (Jpn) eldest progeny now of racing age, Lovett is anticipating seeing them on the track.

“Obviously, we won’t see them that early but we had 12 mares go to him over the last few years. I have got four 2-year-olds in training with Kris Lees, three fillies and a colt. They all look typical Classic-type fillies. They are big, scopey types.”

Among the Tosen Stardom 2-year-olds owned by Australian Bloodstock are Childhood Star, a filly out of Lonhro mare Childhood (USA) and Princess Tosen, a half-sister to multiple stakes winner Princess Posh (Canford Cliffs {Ire}), who was purchased by Ciaron Maher Racing for $160,000 at the Magic Millions Gold Coast Yearling Sale.

Brave Smash’s first yearlings from his Aquis Farm base will hit the yearling sale next year, with strong expectations on how they will be received.

“I’m excited to see what happens with them. The talk has been very positive. We sent a few mares up there and bred a few, but I’ll be keen to buy them as well, because he was such a good horse,” Lovett said.

“At the foal sale up at the Gold Coast they averaged $90,000, so you would think they are going to make their money as yearlings.”

“At the foal sale up at the Gold Coast they (Brave Smash) averaged $90,000, so you would think they are going to make their money as yearlings.” – Jamie Lovett

Commercial imperatives are at the forefront of Lovett’s mind when working through matings and having taken shares in Yarraman Park’s Hellbent a few years back, they have already been well-rewarded.

“We supported Hellbent, bought shares in him and we sold three Hellbents this year. We got $300,000 for an Unswerving filly up there on the Gold Coast and $150,000 for a colt. We did very well with him and we’ve sent eight mares to him this year,” he said.

Unswerving (Commands), who is the dam of stakes-performed pair Dogmatic (Domesday {USA}) and I Am Swerving (I Am Invincible), visited Pierata last spring having previously delivered a Brave Smash colt.

Lovett also sent a trio of mares to Coolmore stallions last year, including Childhood, who visited Justify (USA) and delivered a foal on Wednesday morning by the US Triple Crown winner. Two other mares, The Baroness (Viscount), who is the dam of Princess Posh, and Tuesday Special (Snitzel), the daughter of Group 1 winner Tuesday Joy (NZ) (Carnegie {Ire}), are due to foal to So You Think (NZ).

“So You Think is such an underrated stallion. At $38,500 last year, he was great value. You only have to look at the season he had on the track. He is one of the leading stallions and they train on a bit and we have had a bit of luck racing them,” Lovett said.

“We are always just looking for that commercial angle, and so you have to breed where you can turn a dollar.”

Turning a dollar on the racetrack is also a big priority and having invested heavily in both Gold Trip (Fr) (Outstrip {GB}) and Rodrigo Diaz (GB) (Golden Horn {GB}) in recent weeks, there is an expectation of spring feature success.

Gold Trip, previously trained by Fabrice Chappet in France, has tackled some of the best horses in Europe in his 10-start career, including a fourth in the G1 Prix de l’Arc de Triomphe last year. He is being set for the G1 Cox Plate and will join the Ciaron Maher and David Eustace stable.

“We knew we would have to lift our sights a bit for a horse of that calibre but David Eustace and myself were particularly of the view that he may well be a weight-for-age 2000-metre horse in Australia. Hence, that’s why we have targeted the Cox Plate,” Lovett said.

“The company that he has raced against is the biggest thing. He’s competed at a very high level and has only gone down a length or two. The reality is that he is not quite up to that top Group 1 level there in Europe, albeit he has placed behind some very good horses.

“He’s got the turn of foot which will really suit weight-for-age racing here.”

Both Gold Trip and Rodrigo Diaz will go through the mandatory scintigraphy scans over the next week, with a view to them entering quarantine at Newmarket on September 9 and heading to Australia on September 25.

Rodrigo Diaz, a winner of four of his 14 starts for David Simcock, was last seen when third in the G3 Geoffrey Freer S. at Newbury earlier this month. He is being set for the G1 Melbourne Cup.

“He’s a horse that we have been keen on for a while and we have tried to buy him a few times. The ownership group, Quantum Racing, were reluctant to sell all of him, so we have an arrangement as a 50-50 partnership,” Lovett said.

“He’s (Rodrigo Diaz) a horse that we have been keen on for a while and we have tried to buy him a few times.” – Jamie Lovett

“He may need another run before he goes to the Melbourne Cup, so he may go to a Caulfield or Geelong Cup. He’ll have that lead-up run.

“Hopefully we get the opportunity to get back to Europe with him. If he is as good as we think he is, and if the world got back to normal, we’d go to Ascot with a horse like him.”

While the complexities of the additional measures put in place by Racing Victoria on international arrivals has deterred many Australians from investing in European stayers this year, Australian Bloodstock has seen it as an opportunity.

“It’s probably not as competitive in that there is not as many people trying to buy them. A few were scared off because of the new RVL rules. We adopted a different approach,” Lovett said.

“You only have to worry if you have a horse that isn’t sound. I had the view that it’s a good year to do it. We’ve had a real good crack, we’ve got six horses coming over, only two for the spring, but another three or four that will come to Sydney.”

Lovett and Murrell also anticipated the likelihood of the tightening of entry standards for overseas horses last year and purchased 11 horses through the 2020 Tattersalls Autumn Horses in Training Sale last October.

Several of those are set to make an impact this spring, with Winter Thorn (Ire) (Muhaarar {GB}) a winner earlier this week at Tamworth, and Mankayan (Ire) (Intello {Ger}) and Herman Hesse (GB) (Frankel {GB}) making promising debuts for Maher and Eustace earlier this month. There are also high ambitions for King’s Charisma (Ire) (Teofilo {Ire}), who is set to make his first Australian appearance in September.