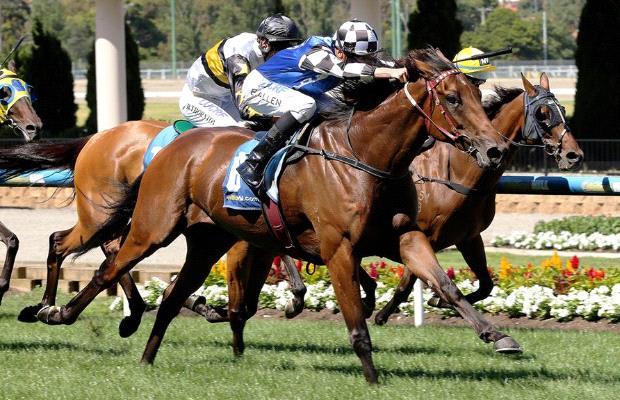 In recent years we’ve been seeing more and more of the Australian Bloodstock colours culminating in the win of Protectionist in the 2014 Melbourne Cup.

With the Cup being the biggest carrot of all directors Luke Murrell and Jamie Lovett at Australian Bloodstock are blueprinting the Lloyd Williams model in securing some real high quality Europeans for Australian conditions.

Lloyd chalked up his fifth Melbourne Cup this year with Almandin, that being his second Cup victory with an import following on from Irish bred Green Moon in 2012.

The Australian Bloodstock colours first came to prominence with Lucas Cranach finishing fifth in the 2011 Caulfield Cup and, after winning the Peter Young Stakes in February 2012 he was favourite for the Australian Cup and Melbourne Cup before going amiss.

In the past couple of weeks we’ve got see both operations in action with Australian Bloodstock producing the impressive Plein Ciel and Big Duke while sandwiched in between was Lloyd Williams with Crocodile Rock, who bolted in at Sandown during the week.

All three horses are showing considerable promise and it certainly wouldn’t surprise to see any, or all developing into Group perfomers in the coming seasons.