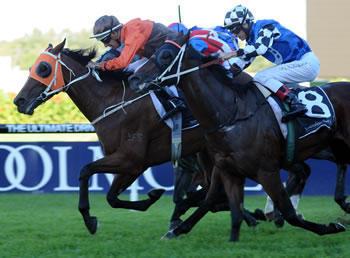 NEWCASTLE: Wednesday, July 17, 2013: KRIS Lees has celebrated his best ever season with the timely arrival of his newest stable acquisition Salon Soldier.

The German import began settling into Lees’ Broadmeadow stables as his new trainer reached a milestone in his career with the success of Beaufort Gyre at Port Macquarie yesterday.

Beaufort Gyre ($5), resuming from a spell, again showed his liking for rain-affected ground when he led throughout in the Class 1 Handicap

That followed on from the stable’s four winners at Scone the previous day.

Unfortunately, stablemate Karamea ($3.40 favorite) could not continue the winning momentum after Beaufort Gyre’s success. She finished fourth in the Benchmark 55 Handicap (1500m).

Perhaps there is more than a touch of coincidence that his record-breaker Beaufort Gyre and newcomer Salon Soldier are both products of leading syndicator, Hunter-based Australian Bloodstock, a wonderful supporter of Lees Racing.

Lees bettered his previous best season of 106 winners in 2008-09. He also trained 105 winners the following season.

Reflecting on his record season haul, Lees today said it was pleasing to get past a century of winners again after a “leaner” couple of previous years.

“We’ve got the numbers but not the breeding depth of some of the top metropolitan stables,” he said.

“It is imperative to place your horses where they can win, so to achieve that number of successes (107) is a good result for all concerned.

“Our objective is always to give our owners the best possible returns.”

Rising five-year-old Salon Soldier arrived in Newcastle at the weekend, and struck an immediate impression with his new trainer.

“He’s a likely type; not unlike Hathras, perhaps a little finer,” he said.

“Naturally, our aim is the Cups with him but he has had two stints in quarantine and we’ll have to wait and see.

“He has gone into work, so his progress will determine our program with him.”