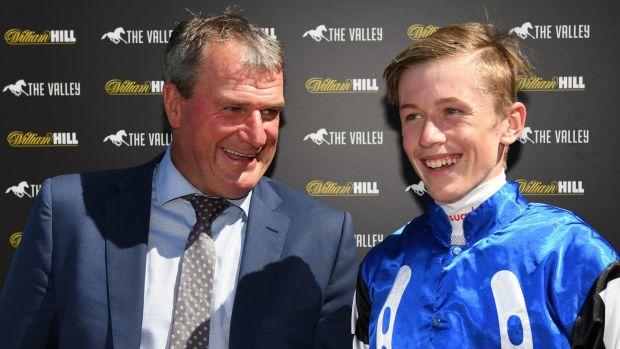 Big Duke survived a scare from Cool Chap in Saturday’s $80,000 Schweppes Sparkling BM78 Handicap (2040m) at Moonee Valley and a rematch awaits next month in one of Tasmania’s premier races.

Big Duke ($1.90 favourite) settled in the second half of the field and with Cool Chap ($5) conceding four kilograms to the eventual winner and tracking his every move through the first half of the race.

When Big Duke hit a flat spot approaching the 700-metre mark, apprentice Boris Thornton went for home on Cool Chap, circling the field to pinch a two-length advantage on the favourite.

However the Darren Weir-trained Big Duke eventually worked his way into the clear and overran Cool Chap over the final 100 metres to win by a length.

“Ben missed the boat a bit but the horse was good enough to get Ben out of trouble and it was a good win in the end.”

WATCH: The clash between Big Duke and Cool Chap

Lee Freedman, trainer of Cool Chap, was effusive in his praise of Thornton.

“The 60kg got him late but what Boris did in the run was excellent and I told him that,” Freedman said.

“He didn’t hurt the horse and he put up a nice run.”

Big Duke, a five-year-old English import that’s won three of eight starts, and Cool Chap, who won the listed VRC St Leger (2800m) and was placed in the Group 1 South Australian Derby (2500m) last season, will both have their next start in the $200,000 Group 3 Luxbet Hobart Cup (2400m) on Sunday, February 5.

The $200,000 Group 3 Luxbet Launceston Cup (2400m), held a fortnight after the Hobart Cup, may also appeal as a suitable option for connections of both horses.