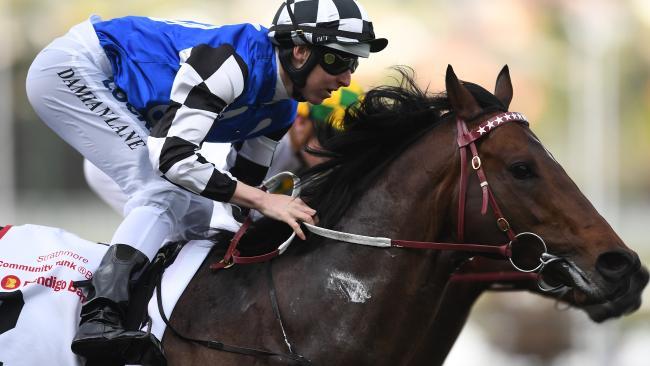 Former Japanese galloper Brave Smash has broken through for his first Australian win with a Listed race victory over 1200m at Moonee Valley.

has kept the door open for a slot in The Everest with a fighting win at Moonee Valley.

The former Japanese galloper is one of five horses short-listed to take the ATC’s slot in the $10 million race at Randwick on October 14.

Brave Smash is in a battle for the slot, one of 12 in the race, against Clearly Innocent, Global Glamour, Le Romain and Redzel.

Sent out the $1.60 favourite under Damian Lane

, Brave Smash scored by a half length from his Darren Weir

Weir said he would have liked to see Brave Smash win easier than he did.

“I would have liked to have seen him run through the line and run away from them a bit better but he won and you can’t do much more than that,” Weir said.

“There’s still a fair bit of improvement to come and we might have to up the ante a bit now as we go on to bigger and better things.

“He’s only had one gallop since he ran the other day.”

Lane said there was a lot to like in the win after having to do it the hard way.

He said the five-year-old was slow to begin and needed ridden early to find a position.

“He did it the tough way but good horses find a way to win at the end,” Lane said.

“He hasn’t won in nearly two years and he might have found himself in an unfamiliar position at the end, but he’ll also improve with the run.”