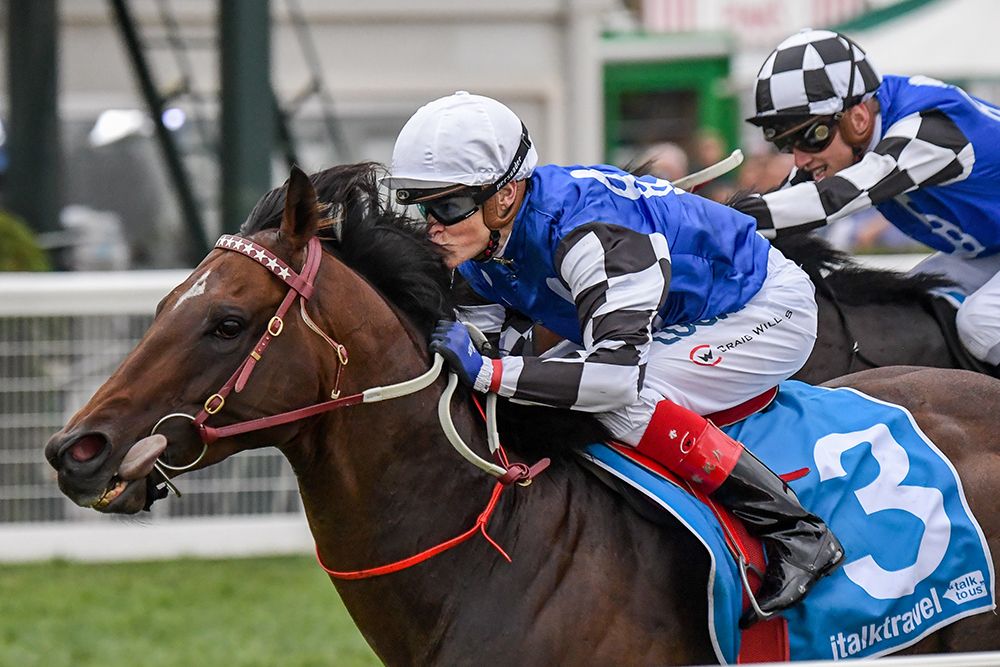 With Aquis making their mark on the race track and the sales ring it is the Japanese import and dual Group 1 Weight-For-Age winner Brave Smash who is lifting Aquis Farm Hunter Valley to a higher level this season.

‘Brave Smash has surpassed even our expectations,’ quoted Jamie Levett of Australian Bloodstock. ‘The first Japanese horse to win a Group 1 WFA race in Australia below 1500m, and has a race record that is the envy of most horses being retired to stud.’

Purchased in 2017 in Japan by Australian Bloodstock, Brave Smash arrived as a 1500m stakes winning 2yo and Group placed 3,4yo and quickly made his mark when finishing third in the inaugural $10m The Everest behind Redzel and Vega Magic.

Aquis proudly announces that the world powerful Sunday Silence sire line has been added to Aquis Farm, as Brave Smash is the best of his sire Tosen Phantom, a grand-son of legendary sire Sunday Silence through, his Japanese 2000 Guineas winning son Neo Universe.

Trainer Kris Lees described Brave Smash ‘as everything a trainer wants in a sprinter – a big powerful hip, incredible action and a devastating turn of foot.’

Also new at Aquis Hunter Valley is the fast and precocious Santos who was an easy winner the Pierro Plate 1100m before a tenacious victory in the Skyline Stakes at 1200m. Previously a Spring 2yo Trial winner who made his debut with a good third in the Breeders’ Plate 1000m.

As Aquis says ‘the Skyline traditionally attracts a high-class field of colts and has been a great race for producing future stallions, with Snitzel, Choisir, Hinchinbrook and Manhattan Rain, the sire of Golden Slipper winner She Will Reign, featuring in the past winners.’

A son of champion sire I Am Invincible, Santos was bred by Emirates Park, he is a half-brother to Japanese Group 3 winner Melagrana, from a half-sister to Group winners Mutawaajid, Adeewin and Fatoon, the dam of Epsom Handicap winner Fat Al.

Completely free of Danehill, Santos has the good looks, natural speed and quality of his sire I Am Invincible, with co-trainer Gai Waterhouse stating ‘I’ve won Golden Slippers with three colts, Sebring, Pierro and Vancouver, and Santos reminds me of these horses.’

New at Aquis Canungra, Queensland is the Chris Waller trained Performer, a son of the new sire-of-sires Exceed And Excel who was a $450,000 Magic Million Gold Coast Yearling purchase.

Bred on the successful Danehill x Snippets cross that has produced Group1 stallions Snitzel, Hinchinbrook and Magnus, Performer is a half-brother to The Galaxy winner Bel Sprinter.

Unbeaten at his first two juvenile starts Performer took out the Breeders’ Plate 1000m at Royal Randwick, and followed with victory in the Canonbury Stakes 1100m at his second race start.

In establishing Aquis Seymour in Victoria, it is Zoustar’s impressive son Lean Mean Machine stands his first season as the 2yo Brisbane Sires’ Produce Stakes winner over 1350m, who as an early 3yo took out the Run to The Rose of 1200m.

Third in both the Kindergarten Stakes and Ken Russell Memorial Classic at two years, the Lean Mean Machine ran third as a 3yo in the Coolmore Stud Stakes at Flemington, giving his sire a history-making one-two-three victory.

Retiring as the only dual Group winning son of his champion sire Zoustar, his pedigree is free of Danehill with his first three dams all juvenile winners, She’s Meaner, his juvenile 1200m stakes winning dam, was also second in the Magic Millions 2YO Classic.

Siege of Quebec also retires to Aquis Seymour this season as the unbeaten debut winning 2yo who defeated the Group 1 winners Pierata and Music Magnate in the Bill Ritchie Handicap of 1400m.

Successful over 1400m at his second 2yo start, before dropping back 1100m in The Rosebud when second to Group 1 sprinter Menari, Seige of Quebec went onto finish second in the Eskimo Prince Stakes, Show County Quality Handicap and third in the Toorak Handicap.

In finishing a close third to Pierata in the All Aged Stakes, Seige of Quebec recorded a 119 Timeform Rating, the highest that season by a 4yo or younger son of champion sire Fastnet Rock.

A $1.2m top-priced Fastnet Rock yearling in 2016 when sold at the Australian Easter Yearling Sale, he has 15 individual black type winners in his first two dams including four-time Group 1 winner Criterion and Doomben Cup winner Comin’ Through.

This story originated at justracing.com.au