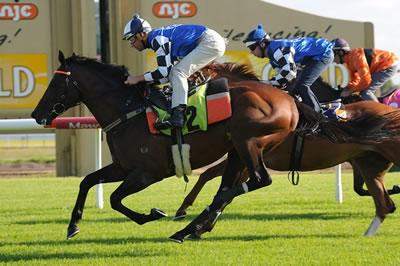 ~~Melbourne Cup winner Fiorente (IRE) was the busiest first season sire in Australia last year covering 186 mares at Eliza Park International in Victoria, a fact that will not have been lost on the connections of reigning Cup winner Protectionist (Ger), who stepped out in a barrier trial at Newcastle on Monday morning.

Now with Kris Lees, the handsome son of Fiorente’s sire Monsun took the first step towards an autumn campaign with a 1200 metre trial.

With Hugh Bowman aboard, Protectionist
(pictured Steve Hart) settled just off the speed before rounding-up stablemate Sommernachtsraum to win by half-a-length (unofficial).

Kris Lees told Sky Sports Radio that Protectionist will be heading back to Melbourne.

“I will give him three, possibly four runs at this stage,” Lees said.

“The Peter Young to kick off then into the Australian Cup. It will be either the Queen Elizabeth or BMW after that, unlikely to do both.

“He’s got to prove he can perform at 2000 metres. I think he will act at the shorter trips, especially kept fresh.”

Fiorente followed a similar program after his Cup victory, winning the Peter Young and Australian Cup before returning to Sydney where his form faded and he finished seventh in the Group I ATC Ranvet Stakes and third in the Group I ATC BMW before retiring due to injury.

Fiorente has been super popular with Victorian breeders and if Protectionist can show his class at 2000 metres, he too will be looking down the barrel of commercial career at stud given he is by the champion German sire Monsun and comes from a female family tracing back to Epsom Oaks winner Pawneese.