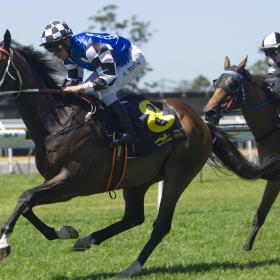 Kerrin McEvoy’s hopes of winning a third Emirates Melbourne Cup rest with international invader Red Cardinal after Australian Bloodstock moved to secure the services of the in-form rider for next month’s $6.2 million showpiece.

Star English jockey Ryan Moore, victorious aboard Protectionist in the 2014 Cup for Australian Bloodstock, had been booked to partner the Andreas Wohler-trained colt but logistical issues arising from a clash with the Breeders Cup meeting at Del Mar prompted connections to source a replacement.

Australian Bloodstock’s Jamie Lovett said McEvoy would likely visit the Werribee International Horse Centre over the coming fortnight to partner the Belmont Gold Cup (3200m) winner in a piece of work ahead of the Cup.

“Logistically it was just going to be too hard getting him (Ryan) out of there,” Lovett said.

“Kerrin didn’t have a ride lined up so it made sense.

“I’ll talk to him (Kerrin) in the morning and Andreas will liaise with him as to when the best time to get out there would be but I’d think he would give him a spin beforehand.

“We’re very happy with him and we are very comfortable with the decision not to run him at Caulfield.”

And while trainer Darren Weir is yet to officially confirm a rider for Big Duke in the Melbourne Cup, Lovett said it was likely that Brenton Avdulla would retain the ride after steering the talented stayer to victory in Sydney’s $500,000 St Leger (2600m) on 14 October.

Red Cardinal is rated a $15 chance by CrownBet in the Melbourne Cup, while Big Duke is quoted at $17 in a pre-post market headed by Caulfield Cup eye-catcher Marmelo ($6).

Connections of another international horse in residence at Werribee, Alain Couetil’s progressive stayer Tiberian, are expected to confirm a jockey for the Grand Prix de Deauville (2500m) winner in the coming days.

While they will tackle the Melbourne Cup with a two-pronged attack, it appears Australian Bloodstock will be without a runner in Saturday’s Cox Plate (2040m) after Lovett confirmed his intentions to instead tackle the Group 1 Cantala Stakes (1600m) at Flemington with last-start Toorak Handicap winner Tosen Stardom.

“I haven’t spoken to Weiry but my preference will be to run at Flemington,” he said.

“He’s a live chance in that Group 1 mile race at Flemington whereas he doesn’t really have a hope of beating Winx in a Cox Plate.”