Cardinal Virtue To Stand In Tassie. 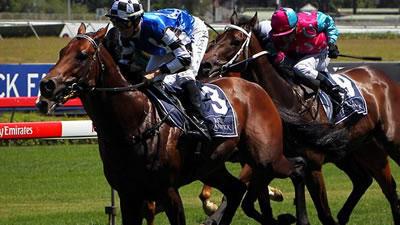 The Tasmanian breeding industry is set to be boosted this spring by the addition of a superbly bred, Group I placed, stakes-winning sprinter.

A son of internationally renowned shuttle sire Elusive Quality (USA), best known as the sire of Golden Slipper winner and Champion 2YO Sepoy, Cardinal Virtue will bring the exact same sire line to Tasmania at a fraction of the cost.

While Sepoy stands at Darley at a fee of $66,000, Cardinal Virtue will join the roster at Graeme McCulloch’s Grenville Stud on behalf of Horner Equine Services at the modest fee of $3,300.

“My 18 year-old daughter is very keen on thoroughbreds and we have a dairy farm with a number of broodmares by leading sires such as Fastnet Rock, Exceed and Excel and Rock of Gibraltar,” explained Saskia van Lulofs Umbgrove of Horner Equine Services.

“It gets expensive when you have send them across to the mainland to go to the better stallions, so we thought why not buy our own!

“We found Cardinal Virtue through Bloodstock.com.au and bloodstock agent Gary Cuddy was very helpful to us in securing the horse.
“He had everything we were looking for and arrived here last Saturday.
“We couldn’t be happier with him. He is a beautiful horse and has such a nice nature.”

A $260,000 Inglis Easter purchase for Darley, Cardinal Virtue won by six lengths on debut as a two year-old in Adelaide before finishing third at his second start in the Group III MRC McNeil Stakes behind brilliant filly Sugar Babe and Whobegotyou, who would go on to win the Caulfield Guineas and numerous other Group I events.

He later won the Listed SAJC Redelva Stakes before being on-sold by Darley to a syndicate put together by Australian Bloodstock.

“If we had a little more luck with him, I have no doubt that he would have won a Group I race. He had definite Group I ability and was a very, very good sprinter,” said Payne.

“As far as conformation goes he is a magnificent horse and has one of the most perfect heads you will ever see. He is a very good looking boy and had a terrific temperament, he was a dream to work with and I’m sure that he will pass these traits on to his progeny.”

Retired to stud in Western Australia in 2011, Cardinal Virtue covered 24 mares, but was then returned to the track for a short unsuccessful stint which has brought about his second retirement and a new chance at stud.

Cardinal Virtue certainly has the pedigree to warrant a shot at a stud career and the good looks and speed to match.

His sire Elusive Quality is proven as a sire of sires through the likes of Smarty Jones, Elusive City and Raven’s Pass, while his dam Valourina is a broodmare with a near flawless record and undeniable commercial appeal.

Valourina made $1.6 million when offered at the 2008 Inglis Broodmare Sale as part of the Tyreel Stud reduction and her current yearling colt by Fastnet Rock fetched $500,000 at Inglis Easter earlier this year.

Completely free of Danehill blood, Cardinal Virtue has elements in his pedigree, notably Elusive Quality and Snippets, that have worked brilliantly with the Danehill line, something that is sure to appeal to the astute breeder.