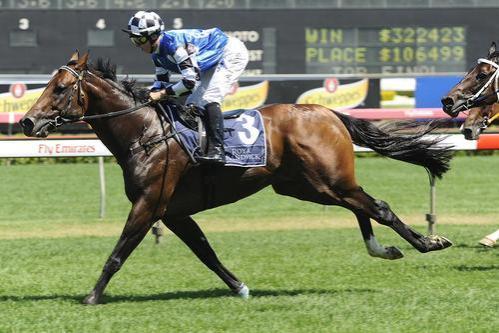 Australian Bloodstock and leading West Australian thoroughbred farm Waterford Stud are proud to announce that the brilliantly bred and recent Group 1 placed sprinter CARDINAL VIRTUE will stand his first season at stud at Waterford’s Waroona base after fierce competition from studs in Australia and New Zealand.

The deal is a significant coup for the Western Australian breeding industry, as Cardinal Virtue adds an outstanding pedigree, as well as speed, precocity, and proven Group 1 performance to the WA stallion roster in 2011.

Not only is Cardinal Virtue the only son of hot stallion ELUSIVE QUALITY (pictured) (sire of Champion 2yo Sepoy) at stud in Australia this coming season, prior to the emergence of Champion 2yo Sepoy, he was the best performed Australian-bred son of his sire! Elusive Quality is destined to make a name for himself as a sire of sires with Group 1 sons SMARTY JONES, RAVEN’S PASS, and ELUSIVE CITY all showing immense potential at stud.

“Cardinal Virtue carries the same blood as Sepoy and he is Elusive Quality’s second best Australian bred son. He is the best bred and arguably best performed stallion at stud in WA this season and he fills a significant hole in the market with WA breeders screaming out for genuine Group class speed influence,” said Australian Bloodstock Director Luke Murrell.

“His trainer David Payne firmly believed that Cardinal Virtue was a genuine Group 1 talent and I am sure we will see his progeny produce that ability in years to come.”

The family produces fast, precocious thoroughbreds that have proven themselves at the top level over many seasons. Valourina’s stock run early and then train on and Cardinal Virtue is the third Group 1 performer from this family!

Cardinal Virtue was originally purchased by global racing and breeding powerhouse Darley Stud for $280,000 at the 2007 Australian Easter Yearling Sales, and made an immediate impact on the track for Darley and trainer Lee Freedman with a 6-length win at Morphettville as a 2yo in May 2008.

Given a brief break by Freedman, Cardinal Virtue returned in the Group 3 McNeil Stakes and finished third on the heels of gifted filly Sugar Babe and multiple Group 1 winner Whobegotyou.

During his next preparation in early 2009, Cardinal Virtue pushed Group 1 Lightning Stakes winner Nicconi to his limits at Moonee Valley, before defeating numerous stakes class sprinters in the Listed Redelva Stakes in Adelaide.

Later that year Darley agreed to sell Cardinal Virtue to Australian Bloodstock and soon arrived in the care of master trainer David Payne, who was able to harness the sprinter’s explosive turn of foot.

When in training with Payne, Cardinal Virtue constantly broke 33 seconds for his final 600m and broke 32 seconds on a number of occasions!

“If we had a little more luck with him, I have no doubt that he would have won a Group 1 race. He had definite Group 1 ability and was a very, very good sprinter,” said Payne.

“As far as conformation goes he is a magnificent horse and has one of the most perfect heads you will ever see. He is a very good looking boy and had a terrific temperament, he was a dream to work with and I’m sure that he will pass these traits on to his progeny.”

Cardinal Virtue was retired to stand at Waterford Stud in excellent condition following a career best performance when third in the Group 1 The Galaxy at Randwick in April.

Cardinal Virtue will stand his first season at Waterford Stud at $7,700 including GST and considering his pedigree, talent, and good looks, this represents great value for all breeders