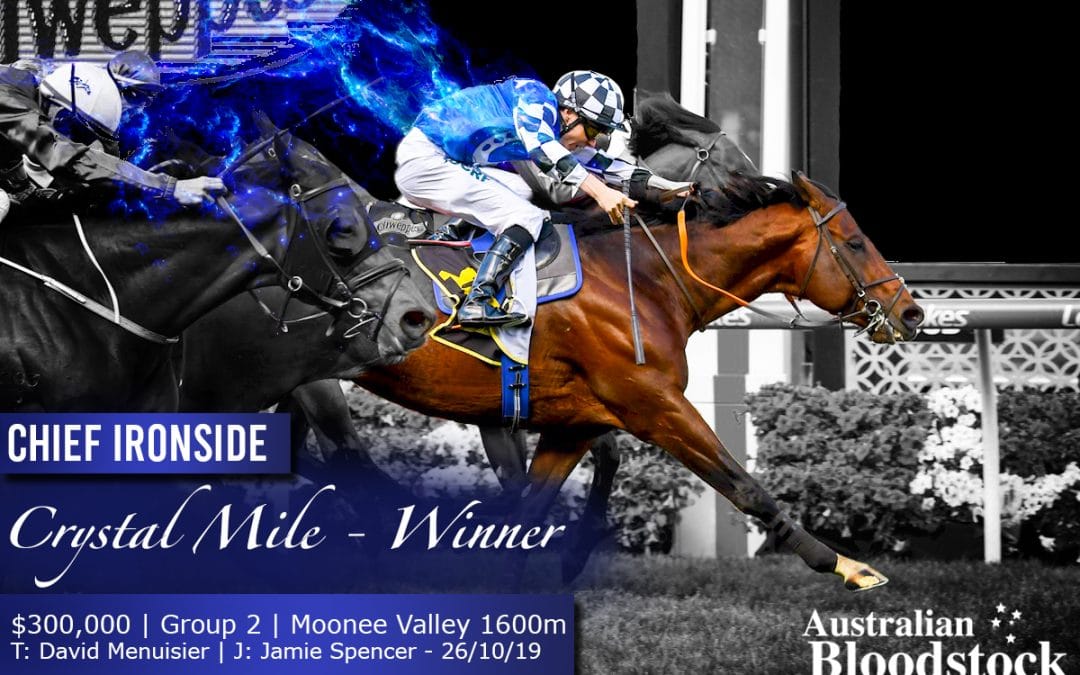 Australian Bloodstock’s Jamie Lovett has celebrated plenty of wins in racing but few have given him as much of a thrill as the win of the David Menusier-trained Chief Ironside in the Schweppes Crystal Mile.

He bought the five-year-old about 10 weeks ago with the view of racing him in Melbourne with people who have owned horses with him, telling them that although he did not have a Cup horse, Chief Ironside could be very competitive over a mile to 2000-metres.

The horse had no luck in his first start in the Toorak Stakes at Caulfield when he was blocked from the 300-metre mark until near the line with Anthony Darminan on board.

Menusier decided to roll the dice and throw Jamie Spencer on the horse’s back and he timed a late run perfectly to just catch the brave Cliff’s Edge on the line, giving Lovett plenty to shout out.

Menusier, a Frenchman who trains in Sussex, noted the connections’ celebrations with the dry wit he has displayed on this visit.

“They know how to hug and kiss by the look of it,” Menusier said.

He admitted to being frustrated with 13th at the Toorak Handicap but stuck to his proven methods at Werribee, working the horse ahead of Cox Plate runner Danceteria on the dirt on Friday.

“We felt as though he was improving all the time,” Menusier said.

Cliff’s Edge was gallant in defeat with his connections despairing as the horses hit the line, while Best of Days returned to form to finish third.

Menusier said they would wait before deciding on Chief Ironside’s next challenge.

Peter Ryan is a sports reporter with The Age covering AFL, horse racing and other sports.