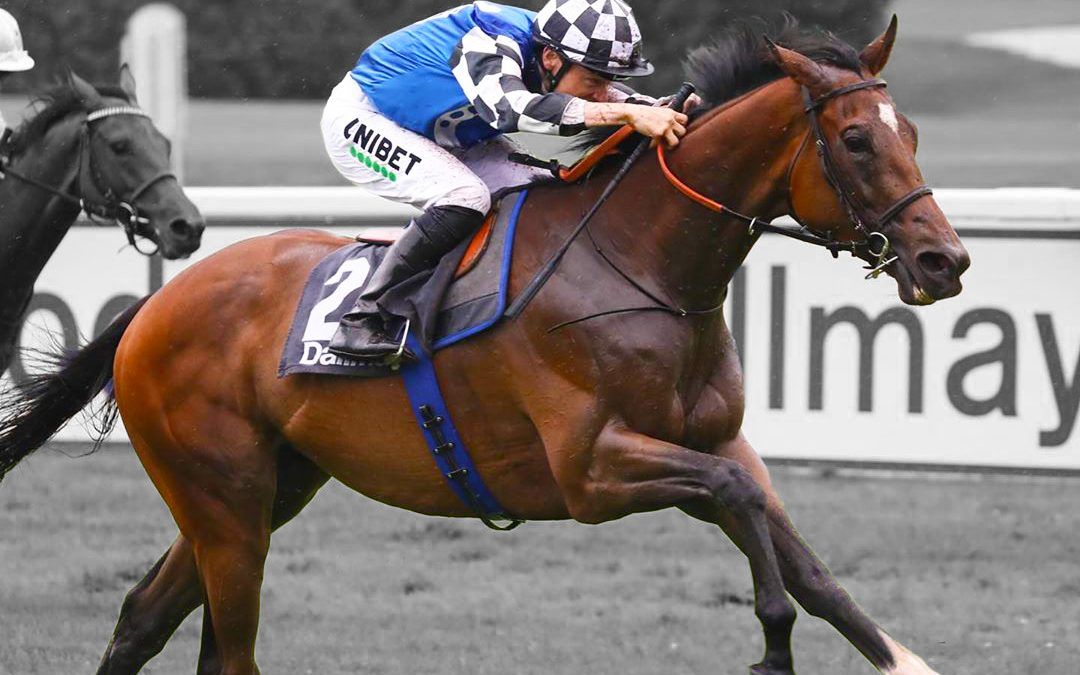 This year’s Cox Plate beckons for the rapidly-improving Danceteria after winning his first Group 1 race in Germany on Sunday.

Held on very damp ground that was officially rated ‘soft’, Danceteria ($3.20) was the equal highest rated horse in the field, along with Stormy Antarctic ($4.80), runner-up in last year’s Grosser Dallmayr-Preis when 2.75-lengths behind subsequent Cox Plate runner-up Benbatl.

The David Menuisier-trained Danceteria settled towards the rear of the eight-horse field for regular rider Jamie Spencer. Spencer allowed Danceteria to move into the race with 600 metres remaining, drawing alongside German-trained three-year-old Quest The Moon ($3.10 favourite) with 250 metres remaining.

Quest The Moon laid in under pressure and Danceteria moved clear to win by 1.25 lengths with Wai Key Star ($19) closing into second ahead of Quest The Moon with his rider Oisin Murphy believing the horse felt the effects of his tough Derby run from earlier in the month over the concluding stages.

“It was so easy, I do not know what I was paid for today,” Jamie Spencer told German Racing.

Australian Bloodstock co-director Jamie Lovett suggested the soft conditions weren’t to Danceteria’s liking despite the apparent ease of his victory.

“He travelled deep on the bridle but I’m just glad he had that bit of class because I don’t know if there would have been much there if he went for him because he doesn’t like that ground,” Lovett told Racing.com.

“Jamie (Spencer) said that he travelled so deep into the race. He’s got a really big action so with that in mind it’s good bringing the horse down under because he’s clearly a horse more effective on top of the ground.”

Australian Bloodstock bought a majority stake in Danceteria after his first-up victory in the Listed Prix Jacques Laffitte (1800m) at Maisons-Laffitte on April 10.

Lovett says Danceteria could have one more run in Europe – the €1,250,000 (A$2m) G1 QIPCO Irish Champion Stakes (2000m) at Leopardstown on Saturday, September 14 – before coming to Australia.

However remaining in Europe and travelling to America for the Breeders’ Cup meeting at Santa Anita on the first weekend of November remains an option if no Cox Plate invite is granted.

“I would think he’d get an invite for the Cox Plate based on his rating now and obviously he’s proved that he’s a serious horse – that Enable form has stacked up hasn’t it?”

Three Australian Group 1 races have been identified as likely targets for Danceteria during the 2019 Melbourne spring carnival, the $1m Ladbrokes Caulfield Stakes (2000m) on October 12, the $5m Ladbrokes Cox Plate (2040m) at The Valley on October 26 and $2m Seppelt Mackinnon Stakes (2000m) at Flemington on November 9.

Lovett also reports that a share in Danceteria has become available within the last week for the horse that is equal $11 third favourite for the Cox Plate with BetEasy, the same odds as Benbatl and Verry Elleegant.

“If anybody wants 10 per cent share in a Cox Plate horse, let me know,” Lovett quipped.

This article originated at racing.com