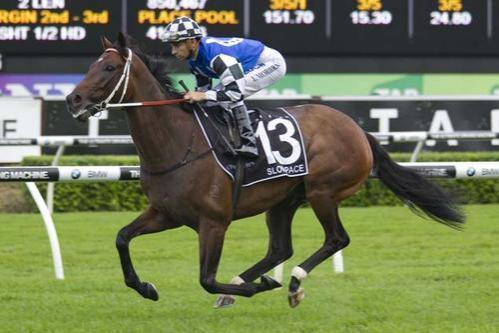 After covering plenty of ground, Slow Pace Horseform fought on extremely well to finish third to another import Spillway in the $150,000 Group 3 JRA Plate (2000m).

“I thought he ran very well in the JRA Plate,” Lees said.

“It will be three weeks between that race and the Cup; there’s no need to give him another run beforehand,” Lees said.

Slow Pace ran a splendid third to Mecir in the Group 3 Newcastle Newmarket (1400m) in March at his Australian debut before finishing down the course in the rich Doncaster Mile on April 12.

His overseas record shows he is more adept over a middle-distance and that was evidenced by his Randwick effort at the weekend.

Stablemate Hera is also heading north for the winter carnival.

The former New Zealand filly did not disappoint her new trainer when fourth to Estonian Princess in the Group 3 J H B Carr Stakes (1400m) at the same Randwick meeting.

Hera gave at least 3kg weight to her rivals at her first start since winning the Sir Tristram Classic (2000m) at Te Rapa on February 8, after which she was purchased by Hunter-based Australian Bloodstock and syndicated to clients.

She has won five of her 12 starts, and next lines up in the Doomben Roses (2000m) on the same day Slow Pace contests the Cup.

Her performance in the Roses will determine whether she proceeds to the $400,000 Group 1 Queensland Oaks (2400m) at Eagle Farm a fortnight later.