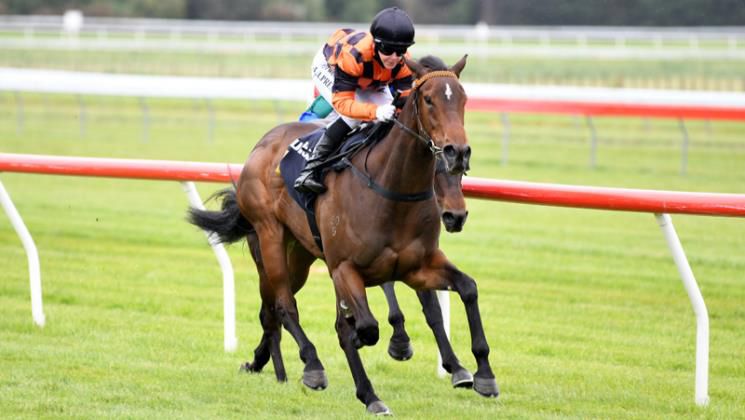 The racing future of impressive debut winner Wolverine lies offshore, but not before she has a crack at New Zealand’s richest two-year-old prize.

Trained and part-owned by Palmerston North horseman Roydon Bergerson, the daughter of Tivaci cruised to victory in her only appearance at Otaki earlier this month to press her claims for the Listed Doubletree By Hilton Karaka Million (1200m) at Ellerslie on January 22.

One of a number of promising young horses under Bergerson’s care, Wolverine’s performance caught attention of several parties and a deal has subsequently been struck to sell a 50 percent holding in the filly.

“Australian Bloodstock has bought half of her and the original owners will keep the other half,” Bergerson said. “At this stage, the plan is she will go to Australia sometime after the Karaka Million.”

“She’ll run in the Wakefield Challenge Stakes (Gr.2, 1100m) at Trentham on Saturday week and I’ll take her up to Ellerslie a week or so before the Karaka Million to give her a look around Ellerslie,” Bergerson said.

He also has another feature race contender in the Gr.1 Vodafone New Zealand Derby (2400m) hope Nest Egg, who gained an overdue maiden success over 1600m on his home track on Saturday.

“The blinkers helped Nest Egg, he was just going to sleep in his races. He was finding the line okay, but not like he did on Saturday,” Bergerson said.

“They have really turned him around and he worked particularly well in them the Saturday before so I thought he would be very hard to beat.

“He’s gone to the paddock for a week before we start up again and aim him at the Derby.

“He will kick off here over Christmas in a three-year-old race over 1400m and then build him up to a mile and his final lead-up will probably be the Avondale Guineas (Gr.2, 2100m).

“He’s always had Derby written over him and got a mile as a two-year-old and we can’t wait to get him over more ground.”

Bergerson was referring to Nest Egg’s effort last season to finish third in the Listed Champagne Stakes (1600m) at Ellerslie.

Stablemate Reign It In continues to improve his racing manners and was a sound third in three-year-old company at the weekend.

“He’s just a big kid, but he can round off some sectionals. I’ve been really pleased with him, he’s still learning and has got a lot of talent, but he’s just a bit raw,” Bergerson said.

“He’s gone to the paddock as well for a little break and I think he’s got the ability to win a good mile. He’s a beautiful, strong horse.”

Meanwhile, Town Cryer may step up in grade and distance following her performance to dead heat for second on her home track over 1600m on Saturday.

“She’s a good mare and I might run her in the Wanganui Cup (Listed, 2040m) on Saturday, but I’ll see what the nominations are like first,” Bergerson said.

“The stayers in New Zealand at the moment are pretty poor so it provides some good opportunities for Town Cryer to get some black type. I think she will be a really good mare come the autumn.