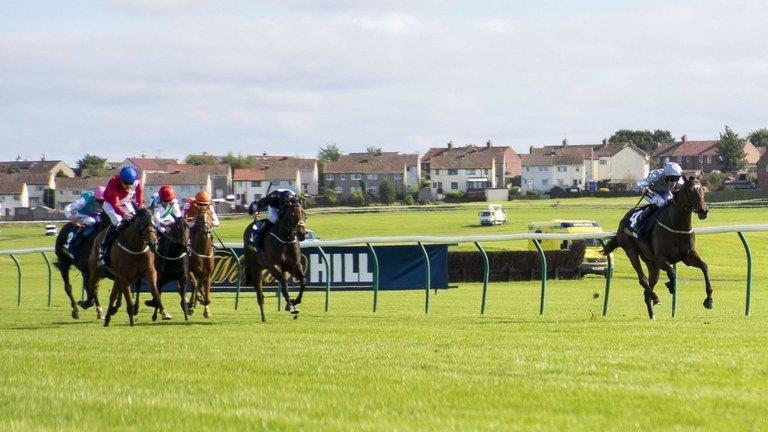 Delectation came from last to first to run out an impressive winner of the William Hill Firth of Clyde Stakes at Ayr.

The Bryan Smart-trained filly provided her new connections Australian Bloodstock with an instant return taking the step up from a Thirsk maiden to a Group Three in her stride as she destroyed the opposition – despite doing things the hard way. It would appear they now have an exciting filly on their hands.

Last out of the stalls, Delectation (11/1) was allowed find her feet and was ridden with extreme confidence by Paul Mulrennan.

He took her from her stands draw across the track towards the far side and the daughter of Delegator fairly flew home to win by two and three-quarter lengths from Rosebride, with Belle Meade a length and a quarter back in third.

“She’ll be a better horse next year when she fills out a bit.

Smart said: “We thought she would run well at Thirsk first time out. I had £5 on her at 50-1 as I thought it (her price) was an insult.

“I was a little bit worried about the ground. She had worked really well at home. She’s a home-bred filly and the idea was to take her to Australia.

“I’m hoping they will leave her with me now and let me train her for the Guineas now as I think she will get the trip.

“I was a bit worried when Paul was really last, but I knew he wanted to go across because we were on the wrong wing.

“Everything went to plan and she did it well.”