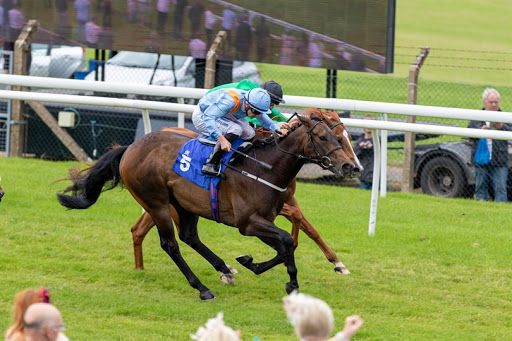 As we have seen with a number of imported horses they have a lot of quality and class and what we have found is by identifying horses with a good physical make up and importantly a strong mental constitution they can really thrive under our conditions.

With the Prize-money on offer in Australia being amazingly strong and in particular the Provincial Championship series worth $150,000 for a heat and $500,000 in the final it’s a very lucrative series that people have neglected, and given the big prize-money on offer we have decided to buy a horse that we think is quite simply, just better than most horses that will run in it.

We have gone back over the recent years and looked at the numbers of the Top 3 across the line in the Provincial Championships Final, and then with that in mind we’ve been searching for a horse that has a average rating that is higher and has run SUPERIOR to what should be needed to win the final.

After much searching we have found a beauty for a cheap price. Given it’s a series of only Provincial NSW trained horses it’s a great series to target and generally you need a BM90 ability horse.

The other great thing about this series is three year old horses have a terrible record as under the Weight for Age scale and conditions they are not well suited, which means it’s a race for the taking.

“I think it’s a good opportunity to buy what I think will be a LISTED HORSE here in Australia and target the $500k race for provincial trained horses. From a risk point of view based on his ability I think he is one to the best value horses we have got for many years because I know he will win multiple races and hopefully good races which should see him return his purchase price back quickly.” – Luke Murrell

“He would be a great horse for a first timer or a group of mates/ punters club as his very genuine and I think will love our races off the times his run up there.” – Luke Murrell

“I think this horse has the ability on his UK form to be a Listed/Group 3 horse here in time and with the series just around the corner I can see him winning a heat worth $150,000 and then being the one to beat in the $500,000 final.” – Luke Murrell

If we look at the winners and placegetters of the Provincial Championship Final over the last few years we get the below form and ratings.

“These ratings are two independent numbers that give me a guide on their performance. One set of ratings is Time orientated and the other is Weights and Measures. As you can see if we get this horse in the final in good order even if we find a very strong year like the years of Bobbing and Serene Miss then this horse, off the numbers, would still start favourite such is his ability.” – Luke Murrell

As you can see his ratings are very strong and he has the ratings to match it with the Group 3 horses like a BOBBING or a SERENE MISS. But the beauty with this series is it’s a restricted race and horses like BOBBING and co have now had too many starts and are not eligible to run.

“Provincial Championships aside this horse has low level Group ability and normally we are paying much more for them than what we are here. He is highly rated in the UK but in Australia he comes here and should be given a nice rating which is well below the level he is racing in the UK.” – Luke Murrell