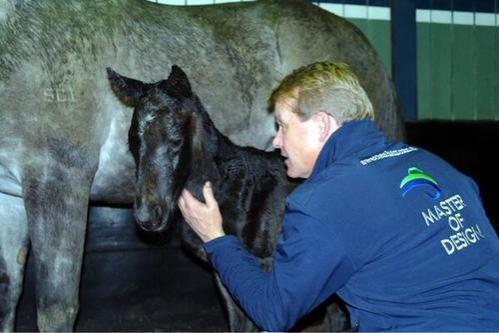 The black colt was born on Monday morning at the Nagambie nursery and is the first foal from grey Dash For Cash mare Miracle Magic. “He’s a very strong type and well put together with plenty of bone,” stud manager Brian Gorman said. “We won’t be able to gauge the Master of Designs as a group until more of them are on the ground but so far, so good.”

Master Of Design (Redoute’s Choice) covered 141 mares in his initial book at Swettenham and Gorman said there should be several more of his foals on show at the stud’s open day on August 25.

“Broodmare owners do like to see a stallion’s first foals before booking in for the second season,” Gorman added. “They won’t be disappointed if they’re all like the first one.”

Master Of Design is a splendid physical specimen and he won the G1 T J Smith at Randwick last year for Australian Bloodstock’s Luke Murrell and Jamie Lovett. His winning time in the T J Smith has only ever been bettered by Black Caviar!

Master Of Design was originally purchased for $2.10 million by Sheikh Mohammed at the 2007 Inglis Easter yearling sale. Sent to Lee Freedman, his heart-score was the best of all horses tested at the Rye stables with an elite A+ rating.

The Irish-based Equinome Speed Gene Test generated another positive result for Master Of Design. He was given a CC rating which predicts the optimum race distance of his progeny will be over sprint trips.

Gorman reports bookings to Swettenham Stud’s stallions have been solid across-the-board this year. Master Of Design will cover his second book for a $12,500 (inc gst) service fee.