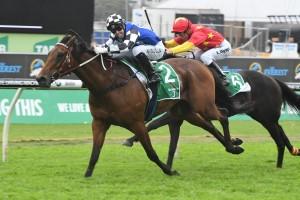 The Kris Lees trained Big Duke will need plenty of luck in running after being out of luck at the barrier draw for the 2019 Group 1 $2m Schweppes Sydney Cup (3200m) on Day Two of The Championships at Randwick on Saturday.

Big Duke drew barrier twenty-one in the original draw of twenty plus one emergency and will jump from the outside gate in the capacity twenty horse Sydney Cup field.

Big Duke is one of four runners Australian Bloodstock will have in the Sydney Cup and will be joined by Red Cardinal and Doukhan from the Kris Lees stable as well as the Chris Waller trained Shraaoh.

Red Cardinal was also out of luck at the barrier draw, coming up with gate eighteen, but Australian Bloodstock director Jamie Lovett is not losing confidence as he knows that both Big Duke and Red Cardinal will both run out a strong 3200m of the Sydney Cup.

Big Duke finished third in the 2017 Sydney Cup as well as a fourth in the 2017 Group 1 $6.25m Emirates Melbourne Cup (3200m) at Flemington while Red Cardinal is a two times two mile winner in Europe and North America.

“The thing I like about both, they are proven at the trip so they will both get the two mile,” Lovett said.

“I think they will run well, but we are going to need luck from back there obviously.”

Big Duke is coming off a last start second in the Group 1 $1.5m KIA Tancred Stakes (2400m) at Rosehill on March 30 while Red Cardinal was seventh in the same race.

Lovett said that he wouldn’t be surprised if Shraaoh was fighting out the finish in the Sydney Cup after the English import ran home for second in the Group 2 $300,000 Schweppes Chairman’s Quality (2600m) at Randwick on Day One of The Championships last Satutrday.

“Shraaoh was terrific on Saturday. He is probably a horse, off his European form, he doesn’t like as much cut in the track that he has had in his racing in Australia, so given the weather is looking a lot better, he could be the horse from the soft gate,” Lovett said.

“He is a bit of a hard pulling horse so hopefully on the seven day back up, Jay Ford can just put him to sleep. I think he will be strong late as well.”

Jay Ford rides Shraaoh who drew nicely at barrier three while Brenton Avdulla on Big Duke and Jason Collett on Red Cardinal will be looking for plenty of favours in the run.

The Charlie Appleby trained English stayer Dubhe has drawn a handy gate at four and with Kerrin McEvoy in the saddle has been installed as the $3 favourite for the Sydney Cup at Ladbrokes.com.au while Big Duke is marked at $9, Shraaoh at $10 and Red Cardinal at $13.

Dubhe is a last start winner over the 3200m at Meydan in Dubai and Lovett agrees with the bookies and can see the Godolphin owned four year old as the one to beat.