Free Transport To Swettenham For Master ! 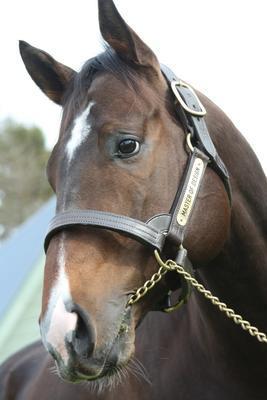 Swettenham Stud has gone on the front foot with its new sire Master Of Design by targeting NSW breeders keen to get involved with the Super VOBIS and VOBIS Gold schemes.

“Super VOBIS and VOBIS Gold have been significantly upgraded and now offer more than $18 million in bonuses each year,” Swettenham owner Adam Sangster said. “It’s a timely opportunity for interstate breeders to capitalize on a serious horse like Master Of Design.”

Sangster will meet the Hunter Valley head-on after his Group 1 winning son of Redoute’s Choice returned high-fertility figures from his initial batch of mares.

Master Of Design stopped 15 of his first 17 mares straightaway and, as a bonus offer, Swettenham is offering free transport to its go-ahead Victorian stud for broodmares based in NSW.

“He’s got a better pedigree and a better race record than all the other young sons of Redoute’s Choice standing in the Hunter Valley,” Sangster stated. “And now he’s taken to the service barn like a trooper.”

Master Of Design joined an honour-roll of legends with an awesome victory in the G1 T J Smith at Randwick earlier this year when Rain Affair and Foxwedge were among the beaten division. “It’s been a race of champions like Black Caviar, Takeover Target and Apache Cat,” Sangster continued. “And his T J Smith time has only been bettered by Black Caviar!”

No other son of Redoute’s Choice has won a Group 1 Sprint at weight-for-age and that alone puts Master Of Design a level above recent Redoute’s Choice retirees like Musir (Coolmore), Time Thief (Darley), Beneteau (Arrowfield) and Tickets (Widden).

Master Of Design is a splendid physical specimen and so fashionably bred that he was originally purchased for $2.10 million by Sheikh Mohammed at the 2007 Inglis Easter yearling sale. He is a Redoute’s Choice half-brother to South African Group 1 winner Suntagonal and hails from the family of leading stallions Danasinga, Towkay and Cullen plus champion mares Tracy’s Element and Typhoon Tracy.

“Master Of Design has an outstanding pool of stakes winning mares and dam of stakes winners in his first book,” Sangster revealed. “They all receive personal care and our in-house vet John Hurley has a 95% success rate with Swettenham stallions over the last three years.”