Freedman Has Another German Import For Spring Carnival 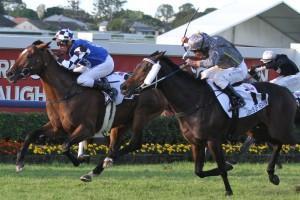 Freedman has had great success with European imports and hopes that Waldpark can follow in the footsteps of Mawingo and Lucas Cranach and go on to win at weight for age.

“He arrived at the Flemington stables a month ago after doing quarantine. I’m literally still getting to know him,” Freedman said.

“He’s a strong horse. He’s still quite a few weeks away from being ready to race.”

Freedman still has plenty of time to work out the Dubawi five year old and the Group 1 $3m Sportingbet Cox Plate (2040m) at Moonee Valley on October 26 will be Waldpark’s main Spring target.

Waldpark has four wins in Germany to his credit including the 2011 Group 1 €500,000 Deutsches Derby (2400m) at Hamburg in Germany in which Mawingo finished fourth.

Freedman also had success with another German import, Lucas Cranach, but recurring foot problems has restricted the Mamool six year old to only three starts for the stable.

Lucas Cranach went into the 2011 Group 1 $2.5m BMW Caulfield Cup (2400m) at Caulfield under a cloud but ran a creditable fifth behind Southern Speed, pulling up slightly lame.

But Freedman was able to treat the problem and saddled Lucas Cranach up for a third in the Group 1 $6m Emirates Melbourne Cup (3200m) at Flemington, beaten one and a half lengths by Dunaden and Red Cadeaux who went across the line locked together.