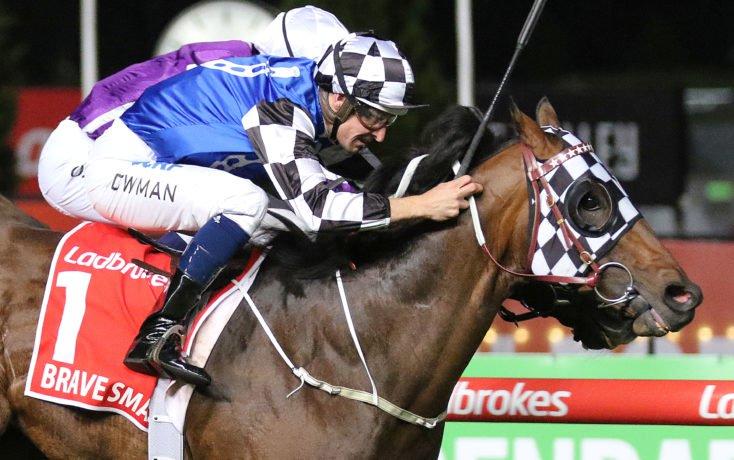 A trip to Dubai for World Cup Night beckons for Brave Smash should he run up to Australian Bloodstock Director Jamie Lovett’s expectations when he lines up in the Futurity Stakes (1400m) at Caulfield this Saturday.

The six year old, now trained by Kris Lees, ran a very good fourth in the CF Orr Stakes (1400m) last time and will go into this weekend third up, with Lovett sounding rather confident when asked about the horse and his chances heading into the Group l, a race he won last year.

“He’ll have a gallop on the course proper on Tuesday morning and that will determine if he wears the blinkers or not but my leaning is that he will wear them.”

When asked if Brave Smash could beat the ruling favourite in pre post markets Alizee, he was very bullish on one condition.

“I’d love for him to draw soft.

“He’s got an explosive turn of foot when cuddled and that’s what Craig (Williams) did last year on him when winning the race so ideally an inside gate to get the cuddle and then explode would be ideal.”

If Brave Smash runs up to expectations, a trip overseas is on the cards.

“Given he’s a future stallion, the option to race overseas is more appealing than the All Star Mile so if he runs well on Saturday, the intention will be to go to Dubai.”

Another runner in the Australian Bloodstock colours that creates interest this Saturday is Shraaoh, an import who is first up for Chris Waller this Saturday at Rosehill over 1500m and is on a 2019 Sydney Cup path.

“He looks to have come back really well,” Lovett said.

“1500m is short of his best, he’ll get back and run on but he’s Grand Final this prep is the Sydney Cup.”

“Long term goal is the Melbourne Cup and if he runs top three in the Sydney Cup, that should be enough to get him in the field.”

Speaking of Melbourne Cup, a race Lovett won with Protectionist in 2014, he did have the 2018 pre post favourite Torcedor before injury cut short those plans. Lovett says the horse has recovered and isn’t far off a return to the track.

“Torcedor is back in work with Andreas Wohler” He said.

“He’ll have a couple of runs in Germany before heading to a staying race in France and then hopefully we can get him to Royal Ascot.”