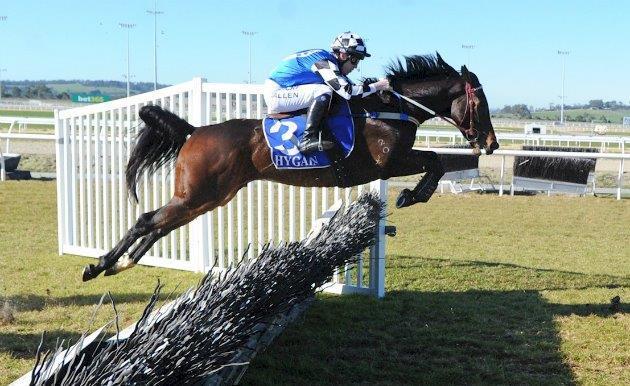 The Listed Andrew Ramsden Stakes winner converted his flat form over the hurdles for trainer Darren Weir and owners Australian Bloodstock at Racing.com Park on Sunday.

Sent out a $1.28 favourite in the Schweppes Maiden Hurdle (3500m), Glorious Sinndar ran away with a nine-length victory with Irish hoop John Allen in the saddle.

Allen said Glorious Sinndar, the former French galloper, was a bit particular about how he encountered the hurdles.

“I’m sure he’ll even out with a bit of running, and that was a good start to his career anyhow.

“He’s one of those horses that I don’t think he’ll ever fall. He’s nearly too careful.

“The more jumping, the more racing he’ll get, he’ll even out and he could make into a nice horse.

“He looks like he’s a really, really good stayer, so the further he gets… he’s real lazy, which can help get a horse a good trip.

“He switched off today, he was nearly a little lazy if anything.

“Once he got over the last, I gave him a squeeze and he really picked up so he’s a good stayer, and hopefully he’ll be a good jumper in the making.”

Pace-setter Monte Carlo finished second for trainer Tony Rosolini while Oregon’s Girl was a further six lengths back in third.