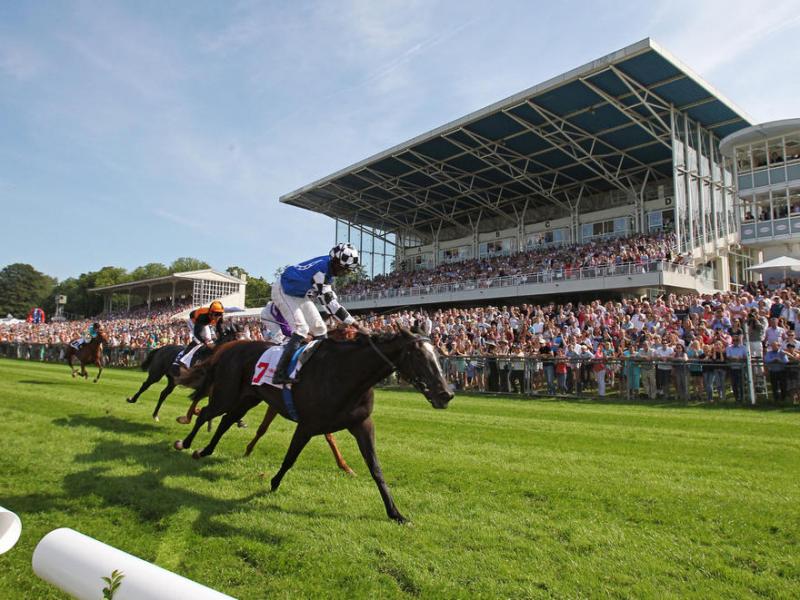 m 157. Henkel – Preis der Diana (Group I, 500.000 euros, 2.200 m) was triumphant with a three-quarter length lead after a thrilling classic the standing owned by Australian Bloodstock three year old mare Turfdonna under jockey Eduardo Pedroza , who in 2013 with Penelopa here was successful.

167: 10 standing on totalizator Doyen-daughter bred the stud Auenquelle had been successful only once this season in three starts. Well brought since the spring of Andreas Wohler trained in Spexard in Gütersloh (formerly at Roland Dzubasz based in Hoppegarten) Lady 300,000 euros on the account of its owner, stayed by denem Seamus Mc Peake with his wife on the spot. “The coach has said that Turfdonna is a good horse. We were just in Europe, at the meeting in Galway and in Ascot, yesterday we have already come to Germany. We wanted to finish in the top four. Now we are very happy, “said the co-owner of the great Owner Community – in these colors won in November also Protectionist the Melbourne Cup for Germany!

Turfdonna always had a good place in the vanguard, down the stretch they pulled away in time to keep the competition at bay very safe. “I could easily in the vanguard oriented. You could turn off well. To win this race, for me is something very special. “

Trainer Andreas Wohler, who a year ago with Feodora was successful here in this mares classics added to: “Turfdonna like doing elastic floor. She still has upped the ante a shovel and be increased. What the owners intend to do with her, you have to see. “Whether Turfdonna continues her career in Australia or stays here, only time will tell.

The Mitfavoritin Nighflower ended as on roller skates and even came to the place of honor. “That was great. Had we had an internal start number, then we would have won. But it went great, “said jockey Andrasch Starke . Also Amona remained as third parties doing well. “An outstanding performance.She has shown that she belongs here, “said her coach Andreas Leo.

The Riesenaußenseiterin Let’s Dance defended after a long lead in fourth place (the Superfecta was not hit) before the stronger bet Desiree Clary (Breeder Bernhard Matusche: “She was never relaxed today”) and Anna Katharina, who could increase any more than that as Ninth but rather pale remained favorite Lovelyn. “She had always around the outside and never had a good situation,” lamented her owner Manfred Ostermann. In any case, it was a great Galopptag in Dusseldorf – the new mares Queen Turfdonna.

2014 was the Röttgenerin world power at the best three-year German mares. But then not everything went smoothly. “She had an injury after the Derby,” said coach Markus Klug. “Their achievements this year in Baden-Baden and the Hansa-Preis in Hamburg were not wrong, most recently in Cologne, the race was very slow. Today she went even their pace, which was the key to success. We now control well a group III-examination in Baden-Baden “, the Champion reported after convincing start-finish victory in the price of the Fritz Henkel Foundation (Listed Race, 25,000 euros, 2,200 m).

More than certainly put the Lady to favorites Nordic Flight which pervaded not completely to repeatedly. Also Nicolosio mixed on innapropriate ground with always, while the series winner Techno Queen never got away from behind. “The ground was laid to, and also the course guide is not ideal,” said coach Hans-Jürgen Gröschel.

With a brilliant debut of up botene Champion Markus Klug youngster Strasoldo waited (73:10, A. Helfenbein) on a 1,400 meter test. Because with powerful eddy Speed trumped the Daylami-son, the coach had chosen for 22,000 euros at the BBAG yearling auction for the stable Margaux, and ran past the competition. “In the bow he has lost some ground, but then attracted huge again. This is certainly a horse for other routes. With a success I had not necessarily expected the same. He mentions for auction race and could possibly start here on 12 September or in the junior award “assured Klug.Dalmatian Sea had inside unlucky and never place the end he passed still the better long looking Neruda and Gonora.

On Saturday Klaus Allofs was allowed to celebrate winning the Supercup against Bayern Munich as manager of VfL Wolfsburg. Now he succeeded with his Galopper a coup – in endowed with 22,500 Euro compensation I over 1,700 meters triumphed him together with the foundation stud Fährhofbelonging Potemkin (19:10, J. Bojko). From second to the hopefuls made from the stable of Andreas Wohler free to lengths of Empire hurricane and Belango. “We had actually flirted already in Hamburg with a win. But there the train was very fast. Today, he has held early approach. In training Potemkin had also taken another leap forward. He is a very quiet and serene horse “, Allofs commented success.

Further enhanced the powerful, trained by Dr. Andreas Bolte for his father Hartmut Elmarani (72:10) presented in a 1,700-meter-balancing III. From second position the mare was early front with their third win of the season and got the onrushing Zuzu Angel, the long leading Anatevka Sun and Shilaya safely under control. Thus triumphed Jockey Filip Minarik just two days after his wedding. The Superfecta was not hit that trifecta paid 39 501: 10 Euro. “Today Elmarani had a dream race came without bloodshed from Box eleven into the front field, carried them and then went forward.”Trainer Dr. Andreas Bolte was highly satisfied.

After a fantastic finish by Andrasch Starke the Ittlingerin Alandia put (29:10) from the district of Peter Schiergen in a 2,200 meter equalization III another point to which the favorite over yet stormed out of an almost hopeless position to Kashya and Alshazah.

Like a horse with another large reserves secured the coached by Hans-Jürgen Gröschel threes Iquitos (37:10, N. Richter) the 1,700 meter compensation II despite a challenging race course. At the very end he still snatched the great current of the top Giolino success, while the series winner Romance Story Third was good. “Thanks to the class of the horse Iquitos has won, although he twice had no passage” commented Gröschel.

The third goal of the season came up botene of Dr. Andreas Bolte Freedom Time (40:10, F. Minarik) from start to finish in the final 2,950 meter handicap before and Maxim Gorky Scataro.