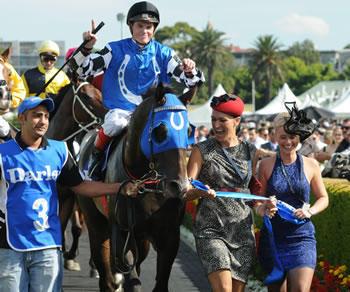 The David Payne-trained galloper was originally purchased by the powerful Darley operation for $2.1 million in 2007. Two years ago, Master Of Design was sold to Australian Bloodstock for $150,000.

Jockey Craig Williams allowed Master Of Design to find his feet in the early stages of the race while Rain Affair, who dipped slightly after the barriers opened, assumed his customary role of pacemaker.

The heavily backed Foxwedge settled second on the outside of Hallowell Belle but when asked for an effort soon after straightening, the multi-million dollar colt couldn’t find much.

Rain Affair continued to fight off the challengers until Master Of Design launched his claim at the 100-metre mark, nailing the leader in the final few bounds. Hallowell Belle, who was forced to wait for a gap, finished third.

“He knocked off the big guns today,” Payne said. “He’s been a problem horse but he has so much ability and he’s delivered.”

The trainer said the patience and nursing of Master Of Design was “part of training” and he had no doubts the son of Redoute’s Choice “should have won the Oakleigh Plate” three starts back.

Williams said he “owed” the connections a Group I victory and thanked Payne for allowing him to ride Master Of Design in the manner he chose.

“I owed David and the connections a luckier ride than the Oakleigh Plate,” Williams said.