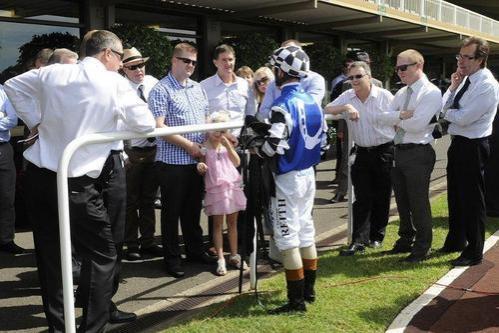 Stakes racing is the next stop for exciting import Hathras after the British-bred galloper blitzed his opposition in the Hunts Comfort Inn Handicap (2200m) at Warwick Farm.

Hathras started his racing days in Germany before Australian Bloodstock found the son of Dansili, purchasing him for his fortunate owners after three impressive outings.

The entire finished second at his Australian debut at Newcastle before the smart prospect notched his first southern hemisphere win on a heavy Rosehill track on March 2.

Hathras found himself back on top of the ground in his Warwick Farm outing, in which he faced just three rivals as a long odds-on favourite.

The four-year-old duly blitzed his opposition courtesy of a smart front-running ride from Christian Reith, who controlled the speed for the first half of the race before gradually exerting pressure on his rivals from the 800 metres.

Hathras strolled to a nine-length victory to convince trainer Kris Lees he was up to tackling the Listed NE Manion Cup (2400m) on March 30 before a possible tilt at Group I level in The BMW on Golden Slipper day.

“I wanted him to have a test and he did,” Lees said. “He had to do all the work and the time was good. Christian (Reith) said ‘he was floating to the line’ and ‘give him something to chase and you’ll see a different horse again’.

“These sorts of horses are bought with the big spring races in mind,” he said. “Ideally you want to qualify them as quickly as possible so if they’re good enough you can program them in the spring to give yourself every chance.

“The Manion qualifies him but he’d be better served running second or third in a BMW. He earns a lot more prizemoney and it would boost his rating more as well.

“I also think the extra week will benefit him and history says the BMW can fall away too. It’s an option we’ll seriously consider.”

Hathras earned a winner’s cheque of $19,880, taking his earnings to more than $70,000 since arriving in Australia.