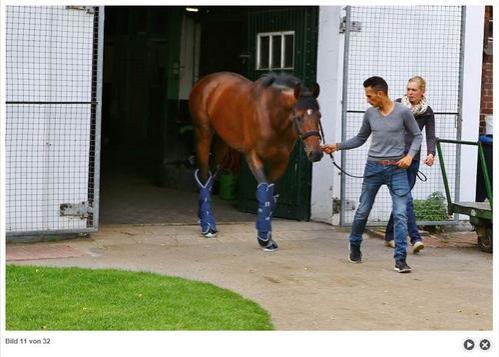 ~~AUSTRALIAN Bloodstock syndicate manager Luke Murrell believes Protectionist can win the race that stops a nation after his slashing run in the Herbert Power Stakes gave the Hunter region links to the Caulfield and Melbourne Cup favourites.

Murrell and fellow Australian Bloodstock director Jamie Lovett are also part-owners in Protectionist, which became an $8 Melbourne Cup favourite with NSW TAB Sportsbet after an impressive fourth in the group 2 Herbert Power at Caulfield on Saturday.

‘‘Not bad for a couple of guys from Newcastle,’’ Murrell said.

Carrying a topweight of 59 kilograms on Saturday, Protectionist stormed home from the rear of the field over 2400m in his maiden run on Australian soil.

The Tony McEvoy-trained Big Memory survived a protest from Glen Boss, who rode runner-up Signoff, to claim win the race.

Let’s Make Adeal was third. It was the first time Protectionist, a four-year-old entire, has been out of a placing in his nine career starts, which include wins in the group 2 Prix Kergorlay and Hansa-Preis.

The impressive finish was more than enough to instil confidence in bookmakers and Australian Bloodstock, who are lining up a third Melbourne Cup runner after Illustrious Blue finished ninth in 2010 and Lucas Cranach was third in 2011.

‘‘When we bought him we always thought and hoped he could run top three, but after that run yesterday probably, without being cocky, I think he can win the race now based on that,’’ Murrell said on Sunday.

‘‘Even parading, you could tell he was there for a conditioning run yesterday, so to finish so strongly was impressive.

‘‘I’m pretty sure that race yesterday would have won 12 of the last 15 Caulfield Cups time-wise, and it’s the fastest time in that race for the past 15 years.

‘‘So there’s a fair bit to like, especially considering that was his first run in a while and he didn’t really get around Caulfield corner.’’

Murrell took added confidence heading into the Melbourne Cup out of the quality of foreign raiders on offer this year.

‘‘A lot of the Europeans that came this year weren’t probably as strong as when we had your Lucas Cranachs, Americains and Dunaden types,’’ he said.

‘‘It’s probably not that strong a year. The Japanese are the query, but outside of that it looks to be a little bit exposed this year already.’’

Protectionist will not race again until the Cup and Murrell said in-form British jockey Ryan Moore had the ride as part of the deal to buy into the stayer, which will join the Lees stables in Newcastle after the race.

The Andreas Wohler-trained galloper was part of a two-pronged import challenge on the Cup by Australian Bloodstock before French stayer Terrubi was ruled out due to a back injury.

‘‘He is a really nice horse too, so we were a bit disappointed, but it looks like this horse is going to make up for it,’’ Murrell said.

However, Murrell and Lovett may still have a second runner in the race in the Lees-trained Slow Pace.

‘‘He will race on Caulfield Cup day and again on Derby day and if he wins either of them, he will get in, and he’s the kind of horse who will run top 10 in it,’’ Murrell said.

Meanwhile, Lucia Valentina franked her Caulfield Cup favouritism with a sizzling gallop on the course proper on Saturday.

With race jockey Kerrin McEvoy in the saddle, the four-year-old mare galloped hard up against the inside fence, coming home the last 400 metres in 22.5 seconds.