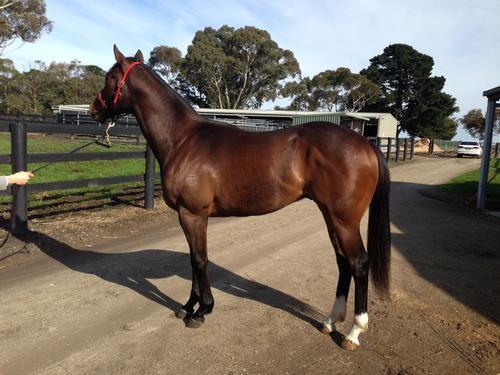 Don’t wait for a yearling…………….. and hope it can gallop- buy this fellow as we know he can gallop and the upside is unlimted !!

Australian Bloodstock is proud to present this 2yr old son of O’Reilly with a Stallions Pedigree. Apart from being an extremely athletic and light mover he is also beautifully balanced and light on his feet and doesn’t carry any excess weight which is a big positive. He is the Half brother to 4 horses who were or had Stakes Class ability and is closely related to the BOOM SYDNEY horse BULL POINT.

We have been recommended this colt by out scouts in New Zealand after he showed enormous ability in his first preparation.. Our spies who have rode this horse and handled him couldn’t speak highly enough of him and as a result we have purchased him before he goes through the public auction. By all accounts this horse “floats over the ground, yet at the same time has an enormous reach and stride and has handled everything effortlessly .“

Our last 3 ready to run 2 year old purchases have resulted in the Group One performed UATE, Karaka Millions Winner OCKHAM’S RAZOR and our latest spruik More than ready colt OCEANUS Who is being set at the feature 3yo races in the Melbourne Spring

The colt is by O’REILLY who is a Champion proven sire of both sprinters and Staying horses and has a Stakes winners to Runners strike rate of just on 10% for his colts. Of the 490 Male runners O’Reilly has sired in his career the average earnings are a remarkable $133,544 per runner !!! His is sire of such horses as ALAMOSA ( Champions Sprinter miler), SACRED FALLS ( Doncaster Winner),SHAMROCKER, MASTER O’REILLY ,Guyno, Swick etc etc

Whilst the sire speaks for himself this colts Dam side is mouth watering. In fact her progeny and close relations are a who’s who of Australian Racing and are constantly being brought for big money.

The Dam MICA’S PRIDE was herself a winner of the Group 3 RESEARCH Stakes and run amazingly well in some of our best races and she has passed these traits onto every single one of her Progeny . She is the Dam of 5 foals to race with all 5 of them winning including :

SILENTY who cost $240,000 as a yearling who was a highly talented Listed winning filly who won over $200,000 in earnings who beat ORTENSIA in the James B CARR Stakes at Randwick

VARENNA MISS- who passed in for $250,000 who was perhaps one of Australia’s most unluckiest Gallopers in that she was a Multiple placed Group 1 filly and Mare but was unlucky in a number of her runs. She still earnt over $365,000 in stakes including winning the Group 2 BTC Cup amongst others

OUR PRIDE AND JOY was highly talented Canny lad mare sold for $145,000 as a yearling who was in our opinion a Stakes class filly and was unlucky on occasions not to win a Stakes race. Such was her ability she recently sold to overseas interests for $600,000 such was her ability and talent

CRITERION due to the family success was not offered for sale but finished his 2yr old season ranked in the top 5 Colts in the Southern Hemisphere, including winning the Group 2 Todman Stakes and the Black Opal Stakes before drawing the wrong barrier in the Golden Slipper and finished right on their heels and then he ran a cracking race in the Champagne Stakes. He finished his first preparation as a 2yr old winning over $450,000 and is one of the favourites for the $1,000,000 Golden Rose- having had just 6 starts his upside is unlimited.

As you can see with her 5 foals to race being winners and 4 of the 5 foals being Stakes horses– we feel the odds are massively staked in our favour and the law of percentages suggest this horse considering the wrap on him will also be good . Whilst there will always be risks with owning race horses buying them after they have shown ability is always a much safer approach and helps to greatly reduce the risk and not only protect your investment but maximise your enjoyment levels

He is currently spelling until the end of August now and then will begin pre training for what will be his third preparation and just like his Half Brother Criterion we are looking to Aim this fellow at the Early 2yr old races and hopefully end up in a Golden Slipper and Champagne Stakes.