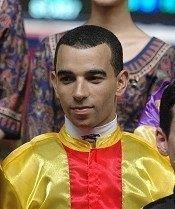 Wednesday, 11 September 2013: An imported entry for the big Group One races in Melbourne will head the list of rides for Singapore sensation Joao Moreira at next week’s Newcastle Cup carnival.

Moreira has accepted an offer from Newcastle-based syndicators Australian Bloodstock to ride their horses at the two-day Broadmeadow carnival on Wednesday and Thursday.

The Brazilian superstar, fresh from riding an amazing eight winners from as many rides at Kranji last week, will be riding at least four Australian Bloodstock-owned runners at the carnival including the imported Salon Soldier in the $150,000 Cameron Handicap (1400m).

Salon Soldier , paid up on Tuesday as a first acceptor for the Caulfield Cup and WS Cox Plate, is now trained at Broadmeadow by Kris Lees.

He will be having his first Australian start in the Cameron and looks set to make an impact after finishing second in a Wyong barrier trial on Monday.

An accomplished Group performer in Europe and Dubai for German trainer Peter Schiergen, Soldier Salon was shipped to Australia after finishing sixth in a G2 event over 2212m at Baden Baden in Germany in May.

Last year he won over 2200m at Avenches in France and was placed in two G3 events in Germany before racing twice at Meydan in Dubai early this year for one placing. He returned to Germany for a Listed placing at Cologne before his sixth at Baden Baden.

‘‘He will be ready for the Cameron. It is the one open race I can find that may suit him first-up,’’ said Lees, who emulated his late father Max Lees by winning the Cameron in 2009 with Absolutelyfabulous.

Moriera will also be riding classy mare Sharnee Rose for Lees and Australian Bloodstock in the $125,000 Tibbie Stakes on the second day of the carnival.

Australian Bloodstock’s Jamie Lovett said it was a coup for the Newcastle carnival to have Moriera riding on both days.

“Joao is a freak and is coming here in red hot form,” Lovett said.

“We have four rides for him over the two days and there has been plenty of interest from other stables.”

Lees said plans to start Australian Bloodstock’s Imported stayer Hathras in the $175,000 Newcastle Gold Cup on Thursday week had been scrapped after his two recent failures in Sydney.

“He’s been gelded and we are looking at bringing him back for the staying races in the summer,” Lees said.