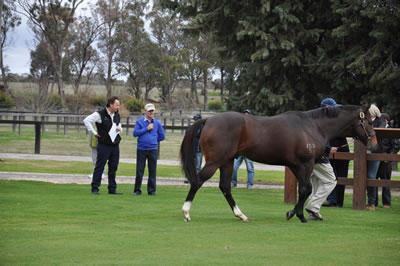 Swettenham Stud paraded its new sire Master of Design on Sunday and the Group 1 winning sprinter created a buzz of excitement at the Nagambie nursery.

Trainer David Payne flew down from Sydney for the day and he was most impressed with the horse’s appearance.

“It’s only been three months since he was in full work to win The T J Smith and he’s letting down beautifully,” Payne told a gathering of the stud’s clients.

“He was a serious horse and had been a good thing beaten in the G1 Oakleigh Plate. Then he lost two shoes in the Newmarket so the T J Smith was a just reward.”

Swettenham owner Adam Sangster had been on the look-out to stand a Group 1 winning son of Redoute’s Choice.

After missing out on Musir to Coolmore Stud, he was fortunate enough to sign Master of Design (pictured Chalpat Sonti/ Seymour Telegraph) .

Payne also trained Musir when that horse arrived back in Australia for a 2010 Cox Plate campaign.

“Musir was top-class but Master of Design was a better racehorse,” Payne declared. “He had to overcome a couple of setbacks to win the T J Smith and I don’t think Adam has lost out on the score of stallion potential.”

Master of Design (6h Redoute’s Choice – Urge To Merge by Last Tycoon) has a pedigree that Payne knows at first hand. His dam is a sister to champion mare Tracy’s Element who won four Group 1 sprints in South Africa. And he’s also a half-brother to Suntagonal who won the G1 South African Champion Stakes just months before Payne left South Africa for Australia in 2002.

It’s a stallion-making family with the likes of NZ based Towkay and Metal Bender’s sire Danasinga. And, for good measure, another G1 winner in the immediate family is Australian Horse of the Year Typhoon Tracy.

Master Of Design will stand his first season at Swettenham Stud for a $12,500 (inc gst) service fee.