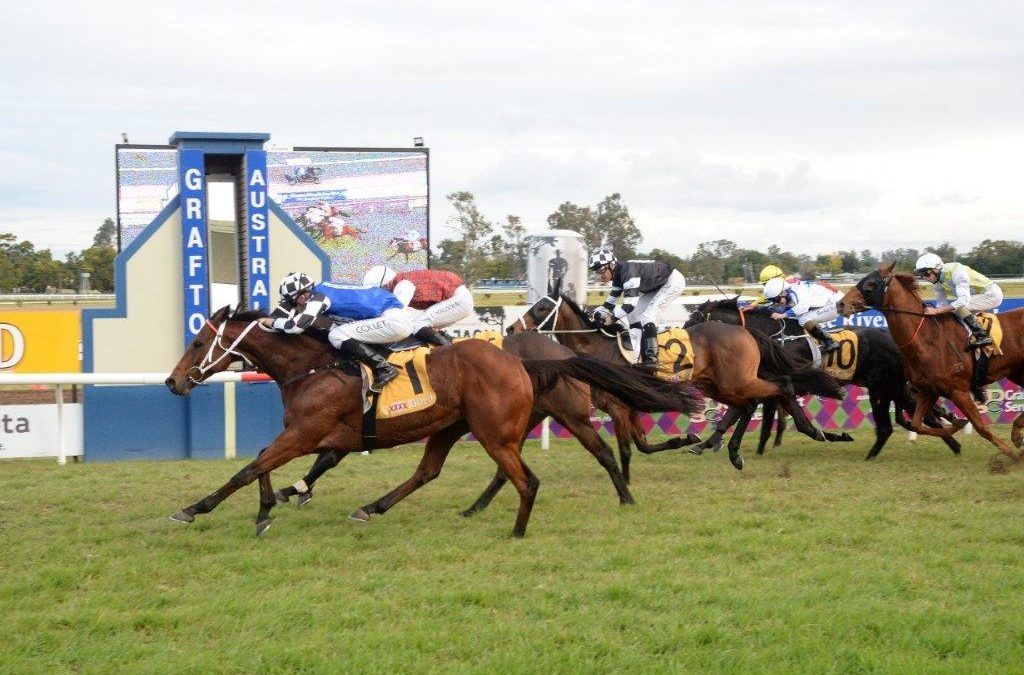 Story by Josh Callinan for newcastleherald.com.au

Newcastle trainer Kris Lees admits he thought Sixties Groove was “settling in for a nice second or third” before becoming the Grafton Cup’s highest weight-carrying winner since 1934.

Sixties Groove, which will now spell before potentially targeting the Newcastle Cup and The Metropolitan this spring, carried 61 kilograms and finished strongly on Thursday to give Lees his first cup title at the annual Northern Rivers carnival.

Sixties Groove mows them down in one of the most thrilling editions of the Grafton Cup you'll see! With 61kgs on his back he becomes the highest weight carrying winner of the race since 1934 😱😱

The seven-year-old gelding made up plenty of ground down the home straight to edge out The Lord Mayor by a half-neck and extend Lees’ advantage to 8.5 over closest rival Chris Waller on the state premiership standings with less than one month left in the season.

“It was a big effort with the weight he was carrying and it hasn’t been done [in that race] for years,” Lees told the Newcastle Herald. “It was a great ride. It was just that will to win, to get out in the clear and then charge to the line. I thought we were going to run a nice second or third, but he just put the head down.”

Lees’ stable was represented trackside at Clarence River Jockey Club by Lucas Miller, who was impressed by Collett’s move to weave Sixties Groove from behind the pack at the final turn to a much wider position for the sprint home.

“What a ride. It’s one of the best you’ll see,” Miller told Sky Racing media.

“He had a lot to do coming at the turn. When he elected to go back inside I thought there was a fair ruck there, but you put the good jockeys on and you get those results.”

Miller explained why, prior to Grafton, Sixites Groove had only raced four times since taking out the group 2 Brisbane Cup (2400m) at Eagle Farm in June last year.

“He had some issues after that and the team has done really well to get him back to the races in this order,” Miller said.

“A track like that was a bit firm for him, like we said pre race, but that type of performance is pretty incredible. Good for the owners and connections, who have been patient with him.”

Lees said Sixties Groove, which now has eight wins and eight placings from 29 career starts, would “freshen up now and possibly go to a Newcastle Cup or more so a Metropolitan” later in the year. The favourite paid $3.30 for Thursday’s win.

Sixties Groove became the highest weight-carrying winner of the Grafton Cup since 1934 after finishing strongly to claim the listed race for Newcastle trainer Kris Lees on Thursday.

The seven-year-old gelding, with 61 kilograms, narrowly defeated the Chris Waller-prepared The Lord Mayor by 0.22 lengths in the $200,000 event over 2350 metres.

Jockey Jason Collett weaved the favourite from the back of the pack to find a clear run out wide with a little over 200m remaining.

Sixties Groove, which took out the group 2 Brisbane Cup (2400m) at Eagle Farm last year, paid $3.30 for the victory on the TAB tote.