Late owner will be riding with Princess Posh in Stradbroke Handicap 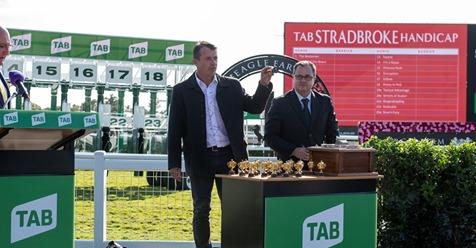 Princess Posh is raced by Australian Bloodstock and more than 16 owners who hail from Queensland, NSW, South Australia and New Zealand along with Leigh Kosch.

Kosch, who is a Brisbane air conditioning installer, is calling on some divine intervention to help Princess Posh get across the line in the $1.5 million sprint.

He was at the Stradbroke Handicap barrier draw on Wednesday and plucked out a perfect barrier three for Princess Posh.

Kosch’s late wife Jacqui was a part-owner of Princess Posh before losing a near six-year battle with cancer in December last year.

The pair loved racing so much they were married at Doomben racecourse 16 years ago.

“My wife Jacqui and I always followed the races, so much so we were married at Doomben,” Kosch said.

“We had our wedding reception in the Chief De Beers room and we held Jacqui’s wake in the same room.

“All the owners in Princess Posh know the story about Jacqui and we know she’ll be riding Princess Posh for us in the Stradbroke.

“She was fanatical and loved her horses.

“When Jacqui was diagnosed with cancer 5 1/2 years ago, we thought life is short, let’s get another racehorse and we ended up with four – Princess Posh, Hearts Honour, Sicario and Monaco Snob.”

Kosch said Princess Posh had always been their favourite horse even though she raced mainly in Sydney with Newcastle trainer Kris Lees.

“Princess Posh was our first purchase and has always been our favourite,” he said.

“She has raced mainly in Sydney but the biggest thrill has been watching her race in Queensland.

“She loves coming up here this time of the year and thrives.

“She raced at Doomben last year in a benchmark 85 and was topweight on a heavy 8, but she went on to win with her ears pricked.

“She then ran in the Tatts Mile but couldn’t get a clear run.”

Kosch said Princess Posh gave him his biggest thrill in racing when the filly ran second at her last start behind The Bostonian in the Group 1 Kingsford-Smith Cup at Eagle Farm.

“Coming second in the Kingsford Smith Cup was definitely my biggest thrill in racing,” Kosch said.

“We’re all battlers and are only five (to ten) per cent shareholders but coming second in the Kingsford-Smith Cup was just like winning a Group 1 for us.

“Jacqui would have been absolutely ecstatic if she was still with us.

The five-year-old is attempting to become only the ninth mare to win the Stradbroke since it was first conducted in 1890.

If Princess Posh does go on to win the Stradbroke for Kosch and his two children Imogen, 13, and Hudson, 11, you can bet London to a brick on the first toast at the after party will be for Jacqui.