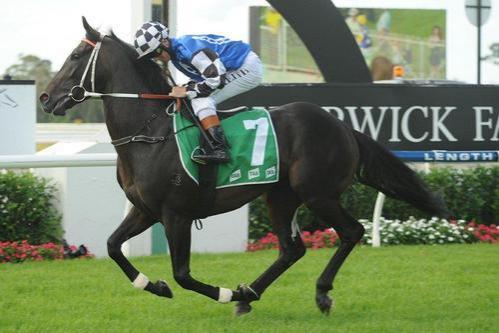 Former French galloper Pirate Bay is the one small anomaly in the partnership between trainer Kris Lees and Australian Bloodstock.

The four-year-old is one of three imported horses Lees prepares for the syndication company along with Award Season and Hathras.

And, so far, Pirate Bay is the only one not to win a race in Australia.

“The ones I’ve had, they’ve all raced well. He’s the only one who hasn’t won yet,” Lees said.

Pirate Bay will get his best chance to rectify that glitch when he tackles the Listed Lord Mayors Cup (2000m) at Rosehill.

Despite the early scratchings of Sysmo and Zedlion, a bumper field of 17 will line up in Saturday’s feature.

Importantly, Pirate Bay has drawn well in gate three and should be close to peak fitness after three local runs, the latest when third to Kelinni in the JRA Plate.

“He produced his best run the other day in good company,” Lees said.

“I thought he raced very well coming off two soft runs. The heavy ten and the 2000 metres were probably why his run just tapered out the last hundred.

“But he’s pretty forward now so I expect him to run well this week.”

If Pirate Bay does perform to expectations, Lees will look to step him up in trip in the Listed McKell Cup (2400m) at Randwick on May 25.

Stablemate Brannickers will also be on trial for a 2400m stakes race when she steps out in Saturday’s Sportingbet Handicap (1900m).

A last-start winner at Gosford, the filly has been slated for next month’s Queensland Oaks pending her performance at Rosehill.

“I think she’s ready to step up to Saturday grade,” Lees said.

“It will determine whether she is up to pursuing an Oaks run, which has always been her aim if she was good enough.”

Lees already has the equal favourite for the Queensland fillies feature in Express Power, a dominant winner over stablemate Soapy Star in the Gold Coast Guineas last weekend.

But his immediate focus is on his Rosehill team, which also includes mares Nuptse and Urgent Bells in the Sporting Chance Ken Callander Fellowship Handicap (1100m).

Three of his four runners are at single figure odds with Urgent Bells a $9.50 chance and Brannickers at $6.

Pirate Bay ($7) is second pick for the Lord Mayors Cup with TAB fixed odds behind Beaten Up ($5), although trainer Chris Waller has indicated the early favourite won’t run.