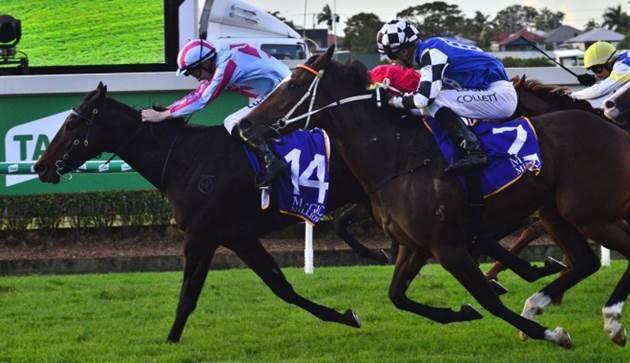 The Queensland Derby holds a special place for Newcastle trainer Kris Lees who chases his first win in the Group 1 feature with fillies Aliferous and Grand Bouquet at Eagle Farm on Saturday.

Lees’ father, the late Max Lees, won the Queensland Derby in 2002 with County Tyrone but Kris Lees is yet to emulate his father’s feat.

“I’ve had a few runners in the Queensland Derby but I’m yet to win one,” Lees said.

“I think the closest I’ve come was with Vitesse Dane when she ran third (to Lachlan River in 2005), after she won the Queensland Oaks.”

Max Lees won 20 Group 1s during his career but is best known as the trainer of former champion two-year-old Luskin Star.

When Lees senior died in 2003, Kris Lees took over training his stable and landed his first Group 1 win with County Tyrone in The Metropolitan (2400m) at Randwick in 2004.

Lees is putting any emotions he may have to win a Queensland Derby aside as he concentrates on snaring victory for connections of both fillies.

“I know Dad won it with County Tyrone but I’d really like to win it for the owners,” Lees said.

Grand Bouquet, barrier 10, is chasing a hat-trick of wins after scoring in lower grade at her past two starts at the Gold Coast while Aliferous (17) is backing up after her fifth to Winning Ways in the G1 Queensland Oaks (2200m) at Doomben last week.

Lees has named Aliferous as this best hope of snaring his 16th Group 1 win.

“Aliferous didn’t have a lot of luck in the Oaks and took a while to get into the clear,” he said.

“Grand Bouquet was second emergency in the Queensland Oaks and didn’t get a run. This is a big jump in grade for her but she deserves her chance.”