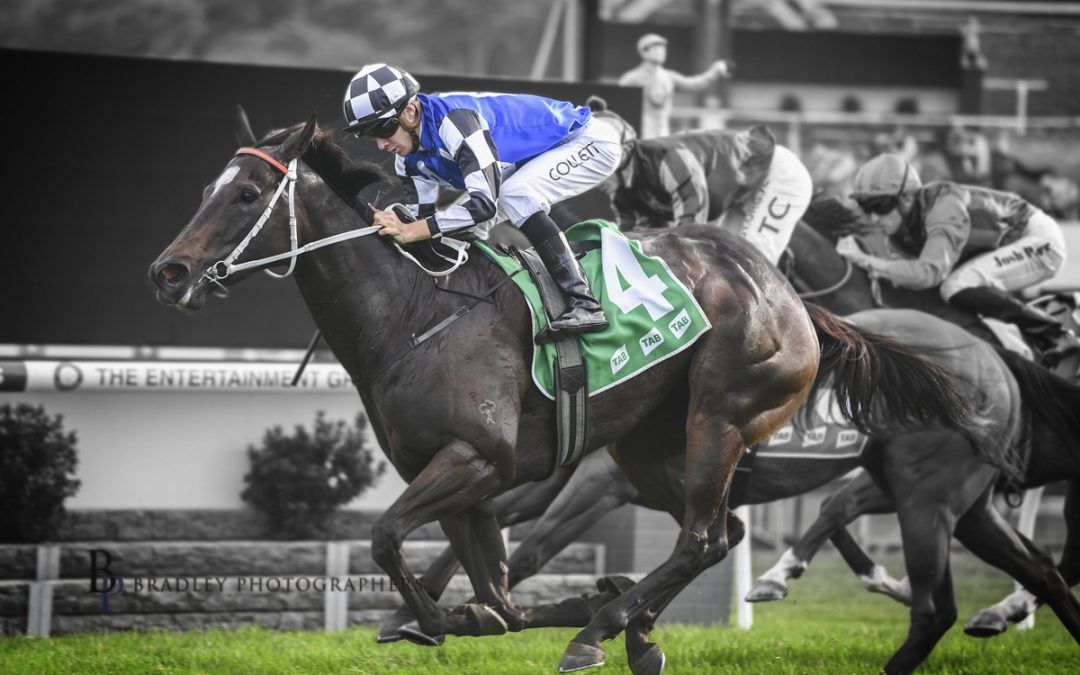 Story by Ray Hicks for racingnsw.com.au:

A race morning decision will determine whether Mugatoo takes his place on Saturday but away from the gelding’s much anticipated return, trainer Kris Lees is hoping mudlark Enchanted Heart can correct a surprising Randwick statistic.

Mugatoo’s comeback from a tendon injury is slated for the Listed $160,000 ATC Foundation Winter Challenge (1500m) but Lees said he is reluctant to kick him off if he feels the heavy ground will be too testing on him.

The ground won’t be a concern for Enchanted Heart, who may be nearing the end of her career given she is set to be sold next month, as she attempts to put two unplaced efforts in tougher grade in Brisbane behind her in the ASX Refinitiv Charity July Sprint (1100m).

Lees said the Group 2 Dane Ripper and Group 1 Tatt’s Tiara may have been beyond her distance and class wise on good tracks.

“She’s had a nice freshen up and she looks well, she could easily do something there,’’ he said.

“They were firm tracks and it was probably a grade above her but she is a competent mare on her day.”

The five-year-old, $4.20 with TAB on Wednesday, has won three of her five heavy track starts while her last win was in the 2021 Listed Takeover Target at Gosford on a soft 7.

Enchanted Heart does have a strange Randwick statistic which says she hasn’t been placed in all seven starts at headquarters.

At a closer look, two of them were in Group 3 events and one was the Provincial Championships Final but Lees prefers to concentrate on the last time she raced there which was first-up in this preparation where she ran fourth behind Surreal Step on a heavy track over 1100m.

“I was pretty happy with her first-up run, I went up (to Brisbane) thinking she would be competitive,’’ Lees said.

“It is odd she hasn’t run a place there but I wouldn’t read too much into it.”

(Mugatoo has been scratched from today’s Listed Winter Challenge Stakes) As far as Mugatoo is concerned, he hasn’t raced since the Doomben Cup of 2021 and he’s been treading water for several months since he took his first tentative steps back to the track in a barrier trial in April.

He trialled twice in May but Lees has kept him up to the mark away from the public eye with time on the water walker and with searching gallops at home as weather has disrupted the trial schedule.

Lees said he’s in no rush with the seven-year-old, who won the Winter Challenge in 2020, suggesting if it doesn’t happen on Saturday there are plenty of options in the coming weeks.

“We’ve come this far and, as much as he loves soft ground, I don’t want to expose him to real testing ground,’’ he said.

“He looks well, he’s free in his action.

“I still want to see him switch right on, I’m a bit guarded with him under race pressure until he has a run or two under his belt but that’s to be expected with an older horse after a long time off.”

Mugatoo was on the third line at $8, alongside fellow top weight Gold Trip, with TAB on Wednesday.

Stayer Our Candidate broke an almost three year drought with a dominant showing over the Grafton carnival and Lees hopes that win sparks him up for a return to town in the Quayclean Handicap (2400m).

Under the conditions of the Grafton race, the seven-year-old carried just 57.5kg in a Class 6 and while the trainer says that must be taken into consideration he was competitive at Saturday’s level on wet tracks prior to heading north.

“We’re hopeful that switches him on,’’ he said.

“He was very well treated in that set weights race so we’re not getting too far ahead of ourselves but you can’t overstate how much that could help a horse that’s been out of form for a while.”

Lees’s other runner is Per Inaway in the TPG Handicap (1500m) and after chasing home Cross Talk and Titanium Power he says coming back to three-year-old company with an outside gate and a claim for Tyler Schiller suits her.

“She’s a consistent little filly and will appreciate the claim. It’s the right set up for her from that gate,’’ he said.