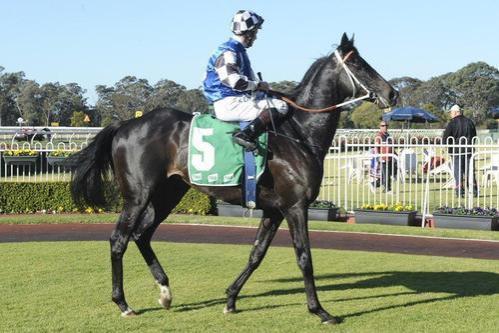 TRAINER Kris Lees is in no hurry with his latest staying prospect Ay No Digas.

But he believes the lightly-raced stallion has the potential to shape up as a Sydney Cup (3200m) candidate next autumn. It’s a big step, of course, from winning a midweek restricted event at Warwick Farm to the Group 1 Sydney Cup at Randwick – but his trainer isn’t hiding his admiration for him.

“And even though he is a stallion, he is no problem to train.

“I’m really looking forward to the future with him.”

Ay No Digas, a son of Singspiel, turned in a dogged staying performance to score narrowly over 2200m in a Benchmark 70 Handicap at WarwickFarm on Wednesday at his first metropolitan start in this country. Though pressured in front by another runner for much of the race, he toughed it out to make it two wins from only three appearances for his new stable.

The much-travelled five-year-old was placed twice over 2200m in Germany in April and May last year and then broke through in an 1810m Maiden at Gulfstream Park (USA) in January before being purchased by Australian Bloodstock.

He ran third on debut here over 1500m in a Class 2 Handicap at Broadmeadow on June 21, then strolled in under 59kg in a Class 1 (1750m) at Muswellbrook early last month.

Lees was considering backing Ay No Digas up at Rosehill next Saturday, but has decided against it because he had such a hard run on Wednesday.

“I’ll wait a few weeks before starting him again,” he said.

“At this stage, we’ll take it a step at a time but if he happened to win a Saturday race in town this preparation, then obviously the Newcastle Cup would be a possibility.

“But I’ve got no doubt he’ll be an even better horse next time in, and the Sydney Cup is definitely not out of the question.”

The $175,000 Group 3 Newcastle Gold Cup (2300m) will be run at Broadmeadow on September 18 and Lees already has another import Oriental Lady (who clinched a hat-trick by scoring on the Kensington track last Saturday) aimed at his hometown feature.