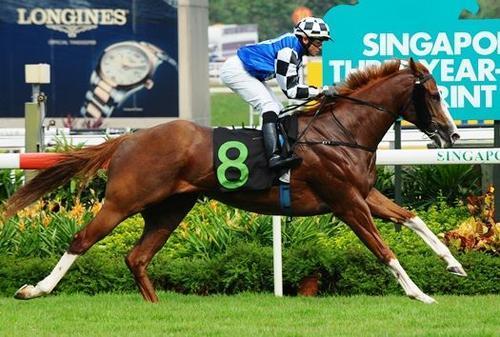 A one-time winner over 1100m back in Melbourne, the Stratum four-year-old has not taken a long time to show his wares at Kranji, especially after he was fitted with winkers for the first time at his last start in a Class 4 race over 1200m.

Ridden by Manoel Nunes, the chestnut gelding raced by the Australian Bloodstock Stable, the same owners behind last year’s Singapore Airlines International Cup placegetter Mawingo, destroyed his rivals with such ease that trainer Michael Freedman thought he deserved a crack at a higher grade, hence his presence in Sunday’s $95,000 Why Be 2006 Stakes, an Open Benchmark 83 race over 1200m with tougher opponents such as Bale Star, One Smart Cat and Klever Man to contend with.
But the way he left his eight rivals standing still in his wake once Nunes let slip some reins at the top of the straight does speak volumes about the way he has really thrived since relocating to Singapore. As Dragon Spirit (Troy See), who wrested the lead from Let Go Lenni midrace, drifted out wide under pressure, a saloon passage opened up for Let Go Lenni, who immediately shot clear to go and post an easy win by a widening margin of three lengths from Klever Man (John Powell), with the head on the chest.

Loyal Friends (Saifudin Ismail) flew home late to take third place another half-a-length away. Sent out as the favourite, Let Go Lenni rewarded his backers with a $11 payout for a win bet.

The smart time of 1min 9.17secs was made all the more remarkable given he was under a tight restraint as he coasted home unextended. Freedman was, however, still guarded in his post-race assessment, preferring to err on the side of caution because of his feet niggles.

“He’s really started to put it together now. It’s taken a little while for him to settle in because of his feet issues,” said the Australian conditioner.

“He’s got those soft front feet and we will have to see how he pulls up after today’s win, but he has certainly shown he is not without ability.

“As long as I keep him sound, he should be able to go through his grades here. The Singapore Four-Year-Old Challenge could be a way to go for him.

“I’ll go back and think about it. He’s run in the Caulfield Guineas over a mile back home, so I have no doubt he can get up to a trip here.”

Nunes said he did not go flogging the horse when the home straight just fanned out like a wide expanse the moment Dragon Spirit took a wide berth at the 400m.

“With his light weight, he showed good gate speed today and it’s amazing how easily he crossed them early,” said the Brazilian jockey.

“When the other horse (Dragon Spirit) came up and insisted on leading, I let him go. My horse was still travelling easy in second spot.

“I couldn’t believe when that horse went wide and I landed in front very easily at the top of the straight. I gave him a squeeze and he just quickened up.

“I didn’t want to punish him as he had the race won from a long way. He could have won by a bigger margin, but I wanted to save some petrol in