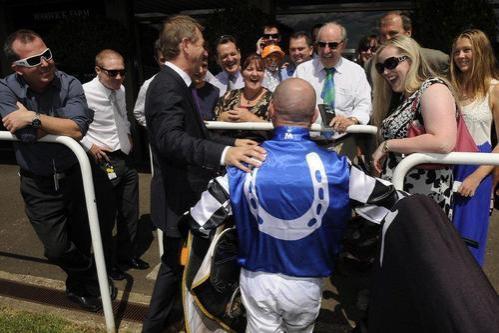 “On what he has done to date, it’s a realistic goal,” Lees said today, confirming he had terminated the former French stayer’s summer-autumn campaign.
Lees sent Award Season to the spelling paddock after he had won at Warwick Farm last Saturday.
“The horse did a terrific job, but it was the right time to call a halt,” he said.
“He’ll have five weeks’ rest, and then we’ll get him ready for the spring.”
Award Season’s targets will be the Listed Wyong (2100m) and Group 3 Newcastle (2300m) Cups in September.
“The Wyong Cup will most likely be his third run back and then it will be on to Broadmeadow a fortnight later,” Lees said.”
“Winning your hometown Cup is every trainer’s ambition, and I would certainly like to win mine.”
It hasn’t been for the want of trying that Lees has been unsuccessful to date in capturing a Newcastle Gold Cup. He finished second in 2003 with his first Cup starter My Tally and filled the same position with Exinite in 2006. Former stable stalwart County Tyrone also registered third placings, in 2004 and 2008.
Provided Award Season races well at Wyong and Broadmeadow, he will go on to The Metropolitan (2400m) at Randwick in early October.
Meanwhile, Lees is keen to start another staying prospect Hathras at Warwick Farm on Thursday. There are only five entries for the 1MW Handicap (2200m) and the Australian Turf Club has extended the closing deadline.
Hathras was an impressive Rosehill winner at his last start on March 2 at only his second Australian start, and Lees says his performance on Thursday will help shape autumn plans for the former German four-year-old.

Hathras has been nominated for the Sydney Cup (3200m) at Randwick on April 27.