Looking To Ready To Run’s In NZ This Week ! 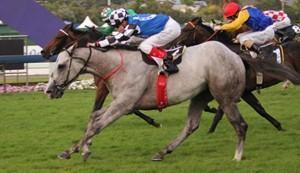 Australian Bloodstock will be active in NZ next week in search of our next Group Performer. If anyone is interested please give Jamie or Luke a call.

The 2012 $1 million Restricted Listed Karaka Million (1200m) – New Zealand’s richest race – celebrated its fifth running at Ellerslie last night and was impressively taken out by the Australian trained – New Zealand bred Ockham’s Razor (NZ).
Trained by Anthony Freedman and ridden by top Australian jockey Craig Williams, Ockham’s Razor (Any Suggestion x Shadow Ray) put in a superb performance in the million dollar event. Drawing wide Williams was forced to ride the well backed colt at the tail of the field with plenty of pace on at the front of the pack.
The widest runner on the turn and many lengths behind the leaders, the challenge looked to be coming from up front with a wall of horses mounting their million dollar bid. But Ockham’s Razor and Craig Williams were simply dominant on the outside, with the colt producing a strong and maintained turn-of-foot to race clear in the final stages to win by half-a-length.
For a two-year-old that had only had one start coming into the Karaka Million, a race well documented to test even the most experienced two-year-olds, his performance was outstanding.
Trainer Anthony Freedman, who travelled to Auckland for the race, was delighted with the result.
“That was very good to win like that, he may be better than we thought,” commented Freedman.
“We came to the Karaka Sales last year and purchased this horse with the Karaka Million in mind. It’s a race we have been focused on for some time so to come over and win it is fantastic.”
A true trans-Tasman result, the New Zealand bred Ockham’s Razor is the second Australian trained two-year-old to win the Karaka Million with the Liam Birchley trained Sister Havana winning in 2010.
Bred by John Thompson and Katsumi Yoshida, Ockham’s Razor was purchased by Bahen Bloodstock Ltd from Rich Hill Stud at New Zealand Bloodstock’s 2011 Karaka Premier Sale for $170,000.
Raced by Australian Bloodstock, Mr J A Shaw, Mr C D Renshaw, Mr J P Hunter, Atkinson-Kaljo Racing, Donnelly Strohfeldt, Rodgers Goldman, Dr A C Matthews, Razor and Blackjack Bobcat, the colt now boasts earnings of over $550,000 from just two starts.
A massive result for first season sire Any Suggestion, only he and General Nediym had two horses in the race. Standing at Rich Hill Stud, John and Colleen Thompson’s operation had a weekend to remember with Say No More winning the Group 1 Thorndon Mile on Saturday for her sire Pentire, who also stands at Rich Hill Stud, and last night’s victory in the Karaka Million.
Any Suggestion has 33 entries at Karaka 2012 including Lot 1034, the full sister to Ockham’s Razor who will be offered by Rich Hill Stud at the Karaka Select Sale.
Running into second place was the Keith & Brendon Hawtin trained Silk Pins (NZ) (Pins x Silk Ending) who put in a big performance for her Australian jockey Hugh Bowman. A winner at Ellerslie on debut in late October she ran second to Travino in her next start in the Listed Merdoch Newell Stakes.
A $60,000 purchase by Whitby Bloodstock Trust from Trelawney Stud at New Zealand Bloodstock’s 2011 Karaka Premier Sale, she has won over $180,000 from just four starts.
From the outside barrier, the Jason Bridgman trained Warhorse (NZ) (General Nediym x Rathlin Island) put in a bold performance in the hands of jockey Matthew Cameron to take third place. Opening the race favourite, the last start Group 3 Eclipse Stakes winner was well supported in the market and ran home well after racing wide in transit.
A $100,000 purchase by New Zealand’s leading buyer at Karaka, David Ellis of Te Akau Stud, the colt has now won just shy of $120,000 in stakes.