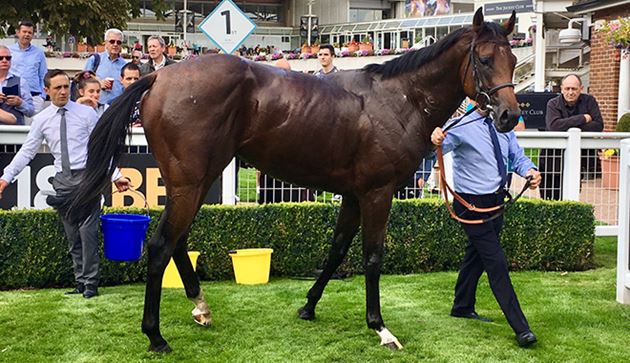 Almania has been nominated and is a likely acceptor for Friday’s Listed Tapster Stakes (2341m) at Haydock. The race is usually held at Goodwood in May but is one of several rescheduled due to the COVID-19 suspension of racing across Europe earlier this year.

The son of Australia will be racing second-up following an encouraging performance during Royal Ascot, when he finished third behind Fujaira Prince in the £35,000 (A$63,000) Copper Horse Handicap (2816m) – one of six extra handicap races run during this year’s Royal meeting.

“We tried to buy him at the end of last year, but he was too expensive, I couldn’t justify spending as much as they wanted,” said Australian Bloodstock’s co-director Jamie Lovett.

“So we just waited, he was gelded at the end of last year, which I think has been a key as well.

“And he was terrific at his previous start (in the Copper Horse Handicap), him running third was a bonus because I didn’t want him to win. He drew wide, got caught wide and his run probably ended the last 200 metres but I think he went super.”

Almania has raced nine times for one win and two placings. His first eight starts came for trainer Sir Michael Stoute and he won at his second start, a maiden over 1408 metres at Sandown with Buffalo River half a length behind as runner-up on debut.

After winning his maiden at the fourth attempt, Buffalo River was acquired by international bloodstock agent Paul Moroney on behalf of his trainer brother Michael and has since won five of six Australian starts, including remaining unbeaten in Victoria.

Almania ran last in the G2 Dante Stakes (2063m) at York behind Telecaster and was then competitive for the rest of his three-year-old season against his own age group in respectable handicap company.

He departed Stoute’s stable at the end of last year after being gelded and joined David Simcock when placed in the Copper Horse Handicap.

Lovett is eager for Almania, who remains in Simcock’s care, to finish top three in this week’s Tapster Stakes to satisfy the first qualification clause for the Caulfield and Melbourne Cups before a potential tilt at the Ebor Handicap (2785m) – Europe’s richest handicap race – at York on August 22.

The final horse to make last year’s Ebor field had a rating of 106, with the two emergencies successfully gaining a start with 105 ratings, meaning that Almania’s current mark of 99 needs to be increased to be assured of an Ebor berth.

“The (Australian) spring will be great with him but I think we’ve got a horse with a fair bit of upside that can be even better next year,” Lovett added.