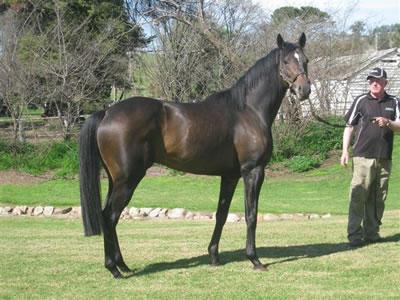 High class import Lucas Cranach (Ger) has settled in beautifully at Bullarook Park Stud with Malcom Boyd reporting that his first mares are testing in foal.

“He has taken to this new role like a duck to water, which is just as well with a very large book of mares to cover,” said Boyd.

Sourced from Europe as a Melbourne Cup horse by Australian Bloodstock, Lucas Cranach was blessed with staying ability and tremendous acceleration.

He started just three times in Australia running fifth first up in the Caulfield Cup to Southern Speed and then third to Dunaden and Red Cadeaux in the Melbourne Cup.

In his final start, Lucas Cranach trounced a field of Group I winners in the Group II Peter Young Stakes over 1800 metres and retired lightly raced with six wins from 12 starts.

“I always had the Opinion he was that good,” Lucas Cranach’s trainer Anthony Freedman said after the stallion’s dazzling Caulfield victory.

A Sadler’s Wells line stallion by Mamool, Lucas Cranach stands at a fee of $5,500.