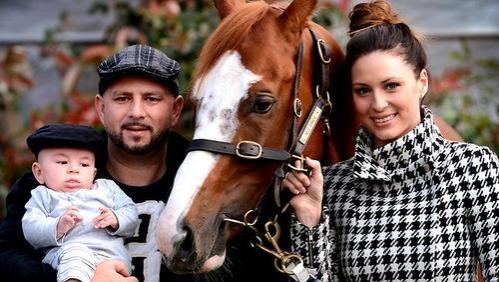 For Ozzie Kheir, who’d promised his mates he’d join them in a fourth horse, there was only one way – name the horse after the unborn child.

“The horse was already called Rock Strada, but I explained to the guys that I was having a bit of trouble getting it (the horse) past the missus, so that’s where Let Go Lenni came in,” Mr Kheir said.

When he was offered his share in Rock Strada, his wife Linsey was thee months pregnant with their first child, already named Lenni.

His foray into racehorses has had its moments.

.
Lucas Cranach and Mawingo, both imported from Germany, have at times looked top class and Master Of Design won a Group 1 sprint.

But Lucas Cranach is injured, Mawingo out of form and Master Of Design retired.

Let Go Lenni is the hope of the team.

Let Go Lenni, second in the Caulfield Guineas Prelude, is a $31 chance. Pierro is the hot $1.20 favourite